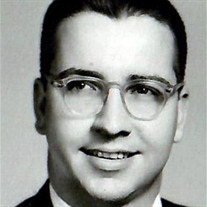 William Daniel Bingle Sr. of the Passavant Retirement Community, Zelienople, formerly of Rochester, went to be with our Lord and Savior Jesus Christ on Monday, February 12, 2018. He was born on November 24, 1933, the son of the late Franklin Elisha and Mary Elizabeth Ifft Bingle. He is survived by his beloved wife of 63 years, Joann C. Bingle and preceded in death by a sister, Betty Ann Bingle; a brother, Wilbur Franklin Bingle; and two sisters-in-law, Margaret Bingle and Lois JoAnn Bingle. Bill was an active and lifelong member of the Grace Evangelical Lutheran Church, Rochester. He was a 1951 graduate of Rochester High School during which time he assisted his father as caretaker of Irvin Cemetery, Rochester Township. Bill served in the U.S. Armed Forces, MASH Unit, as a surgical nurse in the hospital in San Juan, Puerto Rico, during the Korean War. Having been honorably discharged from the Army, he attended and graduated from the University of Pittsburgh with a BS Degree majoring in Physics in 1959. After completing one year of graduate school, he was employed by the NAVAL RESEARCH LAB in Washington, DC; Crucible Steel, Pittsburgh; National Steel Company, Wheeling, W.Va.; and IBM in Boca Raton, Florida, and Lexington, Kentucky. He had a full lifetime career as a research physicist in the field of Sophisticated Instrumentation (Microprob), Ion Spectrometer and Scanning Electron Microscoping. During his tenure, he presented several papers in his field in the United States and Canada. He is survived by, in addition to his wife, one daughter and son-in-law, Danette Christine and Daniel Hunter; a son and daughter-in-law, William Daniel Jr. and Kay Bingle; four grandchildren, Benjamin Eugene Hunter and his wife Samantha, Jacqueline Christine Hunter, Robert Derek Bingle and Nathan Glen Bingle and his wife Jaimee; and three great-grandchildren, Callan Smith, Henry Wallace Hunter, and Eden Elizabeth Bingle. Also surviving are two brothers, Donald E. Bingle and Harold L. Bingle and his wife Judy, several nieces, nephews, great-nieces, great-nephews and friends. Friends will be received on Friday from 2 to 4 and 6 to 8 p.m. in WILLIAM MURPHY FUNERAL HOME INC., 349 Adams St., Rochester and Saturday at 10 a.m. until time of service at 11 a.m. in the Grace Evangelical Lutheran Church, Rochester, 393 Adams St. Officiating will be his pastor, the Rev. Gregory S. Clagg. Interment will be in Irvin Cemetery, Rochester Twp. The family wishes memorial contributions be made to the Grace Evangelical Lutheran Church, for the Lutheran Senior Life Foundation, 105 Burgess Dr., Zelienople, PA 16063.

William Daniel Bingle Sr. of the Passavant Retirement Community, Zelienople, formerly of Rochester, went to be with our Lord and Savior Jesus Christ on Monday, February 12, 2018. He was born on November 24, 1933, the son of the late Franklin... View Obituary & Service Information

The family of William Daniel Bingle Sr. created this Life Tributes page to make it easy to share your memories.

Send flowers to the Bingle family.