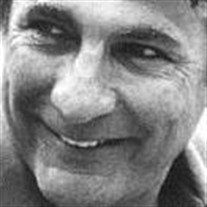 Vito "Babe" Parilli, of Denver, Colo., formerly of Rochester, passed away Saturday, July 15, 2017, at The Center at Lincoln in Parker, Colo., from a long battle with Multiple Myeloma. Babe was preceded in death by his parents, August Sr. and Christine Feola Parilli; a brother and sister-in-law, Frank Parilli and Betty Parilli Baldwin; a brother-in-law, George Edge Sr., and nephew, George Edge Jr. He is survived by his son, Vance of Denver, Colo.; a sister, Martha Edge of Baden; a brother, August Parilli Jr. of Rochester; his nephews, John Parilli of Rochester; Bob Edge and his wife Mary of Ponte Vedra, Fla.; Dennis Edge and his wife Kathy, and Mark Edge and his wife Penny, all of Santa Rosa Beach, Fla., and Lois "Penny" Edge of Columbus, Ohio (surviving wife of George Jr.), and longtime friends, Fran Cucinelli Black of Florence, Colo., and Willie Frank of Rochester. After graduating from Rochester High School in 1948, Babe attended the University of Kentucky, where he became a two-time All American and two-time Heisman finalist while playing for Coach Bear Bryant. His greatest success at Kentucky was guiding the Wildcats to wins in the Sugar Bowl and Cotton Bowl in consecutive seasons. Babe was inducted into the College Hall of Fame in 1982. Babe's 18-year professional football career spanned over two leagues, five teams and 189 games played. He is best known for quarterbacking the New England Patriots for seven seasons. He was voted to three AFL-All Star games and won the AFL's Comeback Player of the Year Award in 1996. He held the franchise record for most touchdown passes in a season until 2007 when Tom Brady broke the record. Babe is fourth on the Patriot's all-time career passing list and a member of the Patriots Hall of Fame. Babe was also known as one of the best placeholders in the game that earned him the nickname "Gold Finger." The combination of holder/quarterback and kicker/receiver Gino Cappelletti came to be known as the "Grand Opera." Babe was traded to the New York Jets and earned his Super Bowl ring as backup quarterback to Joe Namath in Superbowl III. Babe retired from playing in 1970 and began his coaching career that included one year with the Pittsburgh Steelers tutoring Hall of Famer Terry Bradshaw and three years with the Denver Broncos, where he guided Craig Morton's glory in Denver's first Superbowl appearance in 1977. Babe had a passion for the sport and belief that many college football players need more opportunities to live out their dream. He pursued that passion and became a pioneer in expanding the game. Babe spent the remainder of his career coaching in the World Football League, the United States Football League and as head coach of six different Arena Football League teams. In 1997, Babe decided it was time to play golf after 50 years in the game of football. Friends are invited to attend a Mass of Christian burial on Saturday, August 5, 2017, at 10 a.m. in St. Cecilia Roman Catholic Church, 628 Virginia Ave., Rochester. Inurnment will follow in St. Cecilia Cemetery. The Beaver County Special Unit will provide full military honors Saturday at 11 a.m. at the church. Local arrangements by WILLIAM MURPHY FUNERAL HOME INC., 349 Adams St., Rochester. The family wishes memorial contributions be made, if desired, to the McGuire Home, 2119 Mercer Road, New Brighton, PA 15066.

Vito "Babe" Parilli, of Denver, Colo., formerly of Rochester, passed away Saturday, July 15, 2017, at The Center at Lincoln in Parker, Colo., from a long battle with Multiple Myeloma. Babe was preceded in death by his parents, August Sr. and... View Obituary & Service Information

The family of Vito "Babe" Parilli created this Life Tributes page to make it easy to share your memories.

Send flowers to the Parilli family.