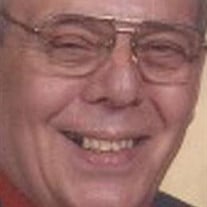 Vito Farelli, Sr., 83, passed away peacefully at his home surrounded by his family on Sunday, August 7, 2016. Vito was born to Joseph Farella and Jennie Ciccarone Farella on March 19, 1933, in Aliquippa, PA. Throughout his life, Vito's infectious smile, gentle spirit and lively personality left a lasting impression on everyone he met. Soon after he graduate from Aliquippa High School, he enlisted in the U.S. Marine Corps. He served as a Corporal in the Korean War. He loved his country and was proud to be a Marine. Vito married Joan Silipigni on August 1, 1959, and so their love story of 57 years began. He valued his family and friends and loved when everyone gathered together to celebrate a special occasion or just for a simple dinner. Vito loved helping others and watching his grandchildren's many sports and activities. Whether you called him dad, pops, pap or a friend, you were always guaranteed to get a listening ear and some good advice. Vito retired as a Safety Engineer from Arco Polymer where, along with his other responsibilities, he was a CPR trainer. He drove a school bus for Rhodes Transportation for many years. He was a member of the Rochester S.O.I. Vito was an avid bowler and belonged to several leagues. He is a member of St. Cecilia Roman Catholic Parish where he had served as an usher. Vito was preceded in death by his parents, Joseph and Jennie Farella and a sister, Anne Marie (Farelli) Pawlak. He is survived by his wife, Joann; four children, Andrea (William) Gray III of Chippewa, Joseph (Debbie Faqua) Farelli of Berlin Center, OH, Vincent (Wendy Kisic) Farelli of Daugherty Twp., Vito (Estelle Parrish) Farelli of Raccoon Twp., and 12 grandchildren, Anthony (Jessica) Gray, Jenna (Mike) Yeager, Nicholas Gray, Nathan and Matthew Farelli, Amanda, Brittany and Zachary Farelli, Theresa Farelli, Tyson Beall, Breanna Dominic Farelli. Also surviving is his brother, Joseph Farelli of Aliquippa; three sisters-in-law, Rose (Edward) Szurley, Rochester; Ann Silipigini, Rochester and Gloria Silipigni Wheeler, North Carolina and many nieces and nephews. The family will receive visitors on August 10 from 2 to 4 p.m. and 7 to 9 p.m. in the WILLIAM MURPHY FUNERAL HOME, INC., 349 Adams St., Rochester. A celebration of his life will be held at 10 a.m. on August 11 at St. Cecilia Church located at 628 Virginia Ave., Rochester, PA 15074. A burial will follow at St. Cecilia Cemetery. A special thank you to his life-long, Frank Waryck and neighbors, Kenneth and Carole McGuckin. We would like to thank Sara, Heather, Maria, Jamie, Faye and Chaplin Black from the Vitas staff and Denise from local VA. You are definitely angels sent from heaven. In lieu of flowers, donation can be made to the VITAS Hospice, 2009 McKenzie Way, Suite 1010, Cranberry, PA 16066.

Vito Farelli, Sr., 83, passed away peacefully at his home surrounded by his family on Sunday, August 7, 2016. Vito was born to Joseph Farella and Jennie Ciccarone Farella on March 19, 1933, in Aliquippa, PA. Throughout his life, Vito's infectious... View Obituary & Service Information

The family of Vito Farelli Sr. created this Life Tributes page to make it easy to share your memories.

Vito Farelli, Sr., 83, passed away peacefully at his home surrounded...

Send flowers to the Farelli family.