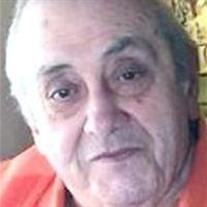 Vincent R. Pronesti 85, of Rochester Twp., passed away Monday, April 16, 2018, in Heritage Valley Beaver. Born October 28, 1932, in Koppel, a son of the late Jerome and Grace Audino Pronesti, he was a retired employee with the former Townsend Co., Ellwood City, and a retiree of the Beaver County Corrections Facility. He was a member of St. Cecilia Roman Catholic Parish, Rochester. A U.S. Army veteran of the Korean War, he was a member of the Father James Reid Council, Knights of Columbus, and was a former bartender with the former Pros Nest, Beaver Falls and Rochester. He was preceded in death by his wife of 62 years, Norma J. (Scruci) Pronesti, in 2017; a daughter, Linda Pronesti; three brothers and sisters-in-law, Joseph and Liz Pronesti, Sam and Ann Pronesti, and John and Eileen Pronesti, and two sisters-in-law and two brothers-in-law, Francis “Buddy” and Genevieve Scruci, and Mary and Gordon Reynolds. Surviving are two daughters and sons-in-law, Susan M. and Harry J. Dunn, Shadyside, Pittsburgh, and Lori Ann and Michael LeDonne, Rochester Twp.; one grandson, Robert Lewchenko and his wife Amanda, Center Twp.; two great-grandchildren, Parker and Kinley; a brother and sister-in-law, Richard and Carol Pronesti, Darlington; a brother-in-law and sister-in-law, Vincent A. Jr. and Nancy Scruci, Brighton Twp., and numerous nieces and nephews. Friends are invited to visit with the family on Thursday from 2 to 4 and 6 to 8 p.m. in the WILLIAM MURPHY FUNERAL HOME INC., 349 Adams St., Rochester. A Mass of Christian burial will be held Friday at 10 a.m. in St. Cecilia Roman Catholic Church, Rochester Twp. Inurnment will be in St. Cecilia Cemetery. A Christian wake service will be held Thursday at 3:30 p.m. in the funeral home. The family would like memorial contributions to be made, if desired, to St. Cecilia Roman Catholic Church, 628 Virginia Ave., Rochester, PA 15074, or to the Franciscan Manor, 71 Darlington Road, Beaver Falls, PA 15010.

Vincent R. Pronesti 85, of Rochester Twp., passed away Monday, April 16, 2018, in Heritage Valley Beaver. Born October 28, 1932, in Koppel, a son of the late Jerome and Grace Audino Pronesti, he was a retired employee with the former Townsend... View Obituary & Service Information

The family of Vincent R. Pronesti created this Life Tributes page to make it easy to share your memories.

Send flowers to the Pronesti family.