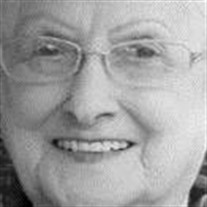 Shirley O. Osipuk Smith, 92, of Rochester, passed away Friday, September 1, 2017, peacefully, while surrounded by her family in Good Samaritan Hospice, Heritage Valley Beaver. Born April 8, 1925, in Aliquippa, a daughter of the late Roy and Dorothy Lang Coxson, she was a member of the Faith Community United Methodist Church, Rochester. Shirley was a secretary for the Baumgard and Reed Insurance Agency, formerly the Tom Bishop Agency, where she had worked for over 40 years and previously was part owner of Maxim's Café, Ambridge. Shirley enjoyed meeting new people and she loved to volunteer. She spent over 20 years as a volunteer at the critical care unit of Heritage Valley Beaver. She was elected Minority Inspector with the Beaver County Election Board. Shirley also loved to bake and she would share her baked goods with her entire neighborhood. She was known for her warm and loving personality and a wonderful laugh that could put you at ease in an instant. She was preceded in death by her first husband, Walter J. Osipuk in 1987; a stepson, Thomas D. Smith; a sister and brother-in-law, Betty Jo and Eugene R. Hall; a brother and sister-in-law, Harry W. and Bertha Coxson. She is survived by her husband, Jack E. Smith, to whom she had been married for 29 years; one daughter and son-in-law, Rebecca S. and John M. Homich, Sr., Ambridge; two grandchildren, John M. Homich, Jr. and his wife, Nicole, Economy Borough and Amy Homich McClymonds and her husband, Randy, Ellwood City; five great-grandchildren; Stella Homich and Jace and Zane Crawford; Kadin and Logan McClymonds; three stepsons, Jeffrey Smith and his wife, Jenny, Whittier, Calif.; James Christopher Smith and his wife, Sherry, Bellfair, Wash.; Kenneth Smith and his wife, Cami, Hopewell Township; a stepdaughter, Lisa Burk and her husband, Rev. Bud Burk, Bloomington, Minn.; six step-grandsons and three step-granddaughters; two step-great-grandsons, and one step-great-granddaughter; one sister and brother-in-law, Phyllis J. and Donald Custer, New Brighton, and numerous nieces and nephews. Friends will be received Tuesday from 2 to 4 and 6 to 8 p.m. in the WILLIAM MURPHY FUNERAL HOME INC., 349 Adams St., Rochester, and Wednesday from 10 a.m. until 11:30 a.m. in the Faith Community United Methodist Church, Rochester, where a service will be held at noon. Officiating will be her pastor, Rev. Dr. Donald Dotterer. Interment will follow in Sylvania Hills Memorial Park. Shirley's family would like to thank the staff at Rochester Villa and Manor for their support and care. Shirley suffered from dementia and her family would like to also thank her roommate, Juliann Popovnak, for always looking out for mom and taking such good care of her.

The family of Shirley O. Osipuk Smith created this Life Tributes page to make it easy to share your memories.