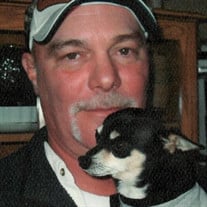 Russell G. “Guppy” Simmons, 59, of Rochester, passed away April 26, 2022 at his residence. Born December 8, 1962 in Rochester, he is the son of Virginia Knight Simmons, Rochester, and the late Clem Simmons. He was a mechanic with Premier Pan Company, Crescent Twp., and formerly with Midway Valley Company, Monaca. He was a motorcycle enthusiast, who loved riding his Harley Davidson motorcycles. He is survived by his wife of 26 years, Wendy A. (Bingle) Simmons. He is also survived by three daughters, Rachael, Jessica, and Tarra; three sons, Anthony, Justin, and Mason; six grandchildren, and one great grandson; four brothers and sisters in law, Chris and Vicki Simmons, Randy and Cathy Simmons, Terri and Jamie Simmons, and Rick and Barb Simmons; two brothers in law, Bob Helbig and Rick MacCaltein; a mother in law, and father in law, Judy and Harold Bingle; two brothers in law and a sister in law, Patrick and Kathy Bingle, and Jake Bingle; he is also survived by two canine companions, Talon, and Langston. He was preceded in death by two sisters, Vicky MacCaltein, and Melinda Helbig; a brother Leonard Simmons, and his beloved canine companion, Boo. Friends will be received Sunday, May 1, 2022 from 2-4 pm & 6-8 pm in the WILLIAM MURPHY FUNERAL HOME, INC. 349 Adams Street, Rochester where a service will be held Monday at 11 am. Rev. Gregory S. Clagg, Grace Evangelical Lutheran Church, Rochester, to officiate.

The family of Russell G. Simmons created this Life Tributes page to make it easy to share your memories.

Send flowers to the Simmons family.