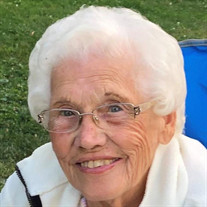 Roberta G. Black, 95, of New Sewickley Twp., passed away January 9, 2022 at Good Samaritan Hospice, Beaver. Born May 13, 1926 in Vanport, she was the daughter of the late Alford and Sarah Mather Altenbaugh. She retired from the former Westinghouse Electric Corporation after 30 years of service. She was also a past member and Deacon with the former Freedom Presbyterian Church, a former member of the Zelienople Harmony Methodist Church, where she belonged to the Keenagers of Portersville, and the Methodist Together Class. She was presently a member of the Grace Evangelical Lutheran Church, Rochester and was recently attending the New Brighton United Methodist Church. She was preceded in death by her husband, Loyal K. Black, Jr., in 1988. She was also preceded in death by a granddaughter, Sherree Richards, a sister, Dorothy Altenbaugh, and a close friend, Thomas George, Sr. She is survived by two daughters and sons in law, Deborah L. and John Newton, and Denise and Larry Parks, all of New Sewickley Twp.; two grandchildren, Chad Parks and his wife, Katie, Brighton Twp., and Caitlin Newton, New Sewickley Twp.; a grandson in law, Robert Richards, New Sewickley Twp.; four great grandchildren, Logan and Madelyn Richards, and Evie and Henry Parks; one sister and brother in law, Hazel and Ted Withers, New Sewickley Twp., as well as numerous nieces and nephews. Friends will be received Friday, January 14, 2022 from 2-4pm & 6-8pm in the WILLIAM MURPHY FUNERAL HOME, INC. 349 Adams Street, Rochester where a service will be held on Saturday at 11am, officiating will be her former pastor, Rev. Lance Chapman. Interment will be in Sylvania Hills Memorial Park. The family wishes Memorial Contributions be made to the Grace Evangelical Lutheran Church, 393 Adams Street, Rochester, PA 15074 or the New Brighton United Methodist Church, 1033 6th Avenue, New Brighton, PA 15066. A Celebration of her life with gathering of friends will be held at a later date.

Roberta G. Black, 95, of New Sewickley Twp., passed away January 9, 2022 at Good Samaritan Hospice, Beaver. Born May 13, 1926 in Vanport, she was the daughter of the late Alford and Sarah Mather Altenbaugh. She retired from the former Westinghouse... View Obituary & Service Information

The family of Roberta G. Black created this Life Tributes page to make it easy to share your memories.

Send flowers to the Black family.