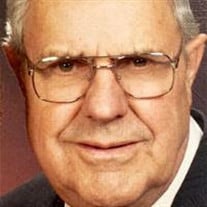 Robert B. ‘Bob’ Young, 91, of New Sewickley Twp., passed away Thursday, July 18, 2019, in the Brighton Wellness and Rehab Center. He was born October 22, 1927, in New Brighton, the son of the late Benjamin P. and Evelyn Dewhirst Young. He was retired with the former ARMCO Steel in Ambridge and was a member of St John United Evangelical Protestant (Burrys) Church, where he was an elder and member of the adult bible class. He was a World War II Army Air Corp Veteran; member of the Big Knob Antique Tractor Club and a charter member of the Pine Run Sportsman Club. Bob and his wife loved square dancing. He is survived by his wife of 65 years, Marcella M. (Pfaff) Young; two sisters, Alice J. Davis, New Sewickley and Eleanor Hicks of Daugherty Twp.; four brothers and sisters-in-law, Richard Young of Daugherty Twp, Walter and Carole Young, Rochester Twp; David and Bonnie Young, Chippewa Twp. and John and Marlene Young, Ellamore, W. Va. and Gladys Young, New Sewickley Twp. and numerous nieces, nephews, cousins and in-laws. He was preceded in death by a daughter, Marla Mottern in 1983; a brother, Donald Young and a sister-in-law, Margaret Young. Friends will be received on Tuesday, July 23, 2019, from 2 to 4 and 6 to 8 p.m. at WILLIAM MURPHY FUNERAL HOME INC., 349 Adams St., Rochester and on Wednesday from 10 a.m. until time of the service at 11 a.m. in St John Burry’s Church, officiating will be his Pastor, Win R. Groseclose. Interment will follow in Burry’s Church Cemetery. Memorial contributions may be made to St. Jude’s Children’s Hospital or charity of choice.

The family of Robert B. 'Bob' Young created this Life Tributes page to make it easy to share your memories.

Send flowers to the Young family.