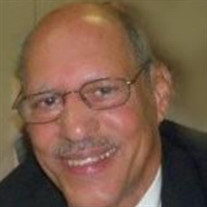 Richard Anderson Puryear, Jr., age 91, of Sewickley and formerly Rochester and Vanport, went home to be with his Lord and Savior, Jesus Christ, on Thursday, October 29, 2020. He was a good man, full of the Holy Spirit and strong in faith. He was born June 8, 1929 in Rochester to the late Richard A. and Nellie Smith Puryear. Richard, fondly called “Dick” and “Richie”, was a member of Boy Scout Troop 420 of Second Baptist Church, Rochester. He graduated from Rochester High School in 1947 and was known as “Fast Boy” for his basketball skills. Having spent the next twenty years in the United States Air Force on assignments in six different foreign lands before retiring in 1968, he was later employed by Westinghouse briefly and then United Parcel Service for 17 years, retiring in 1987. He loved the Lord and to study His Word. In 1994 he graduated from the Harty Bible School, Pittsburgh. He was a former member for eighty years of Second Baptist Church, Rochester and held the office of Deacon after prior faithful service as trustee, senior choir chaplain, Vacation Bible School teacher, serving on many committees. The ministry most dear to his heart was serving the Community Table for the needy at the Salvation Army. He also held the office of trustee and treasurer for Christians United of Beaver County. In January 2017 he became a faithful active member of Triumph Church, Pittsburgh in Ohio Township, serving as Deacon Emeritus, attending Wednesday Bible Study, Senior Ministry Bible Study, and Marriage Ministry. He leaves to cherish his memory his loving and devoted wife of 42 years, Wanda J. Wyse Puryear; two daughters, DeVorne Elizabeth (Robert) James, Pittsburgh, PA; and Doreen Lynn (Rev. Willie) Gant, Chandler, AZ; two sons, David Wayne Puryear, Cathedral City, CA., and Maurice Richard Wyse, Wellsville, OH; three grandchildren whom he dearly loved and adored, Joel Christopher Gant, Chandler, AZ; Lillie Kay Wyse and Maurice “Richie” Wyse, Jr., Wellsville, OH. Also surviving him are his sister and brother - in- law, Gloria and Alva Berry, Apache Junction, AZ, sister - in – law, Garnett Puryear, Youngstown, OH, and a host of other family members and friends. He was preceded in death by his first wife, Doris Elizabeth Gilmore Puryear in 1967; his brother, Arthur T. Puryear, sister, Janet L. Scott House, and nephews, Robert J. Scott, and Michael T. Berry. Due to COVID 19 there will be no public viewing or service at his request. A Celebration of Life Memorial Service will be held at a later date. Private service will be held by his Pastor, Craig L. Giles of Triumph Church, followed by interment at the National Cemetery of the Alleghenies, Bridgeville, PA. The family would like to thank Dr. Gregory B. Patrick, the CCU staff of Sewickley Valley Hospital, and the Good Samaritan Hospice of Wexford for their loving kindness and compassionate care. Arrangements are entrusted to the WILLIAM MURPHY FUNERAL HOME, INC.., 349 Adams Street, Rochester, PA.

Richard Anderson Puryear, Jr., age 91, of Sewickley and formerly Rochester and Vanport, went home to be with his Lord and Savior, Jesus Christ, on Thursday, October 29, 2020. He was a good man, full of the Holy Spirit and strong in faith. He... View Obituary & Service Information

The family of Richard A. Puryear Jr. created this Life Tributes page to make it easy to share your memories.

Send flowers to the Puryear family.