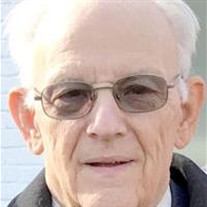 Richard Seiple Crumrine, MD, 82, of Beaver, joined his Lord and Savior Jesus Christ on Wednesday, March 6, 2019. Dr. Crumrine was son of the late Norman Ross Crumrine, MD and Elizabeth Seiple Crumrine. He was predeceased by his wife of almost 55 years and the love of his life, Margaret McAlister Hall Crumrine, as well as his parents and a brother, Norman Ross Crumrine II. Dr. Crumrine practiced otolaryngology in the Beaver Area for 50 years, after graduating from Beaver High School, receiving his B.S. from Northwestern University, earning his medical degree from Thomas Jefferson University School of Medicine (like his father before him), completing an internship and surgical residency at Lankinaw Hospital in Philadelphia, and station-ing on Long Island with the U.S. Navy. He was a kind and generous father, grandfather, and brother. He will be sadly missed by a son and daughter-in-law, Rick and Pam Crumrine and their children, Bill and Abby; a daughter, Jeannie and her husband, Kevin Bingle and their daughters, Sarah and Elise; his sister Gretchen and her husband, Tom Schwertz; all of Beaver and a sister in law, Louise Crumrine of Victoria, Canada, as well as many friends and extended family. Dr. Crumrine will be sadly missed by thousands of patients. He will most be remembered in that Norman Rockwell way of one caring physician with one single patient at a time in the most patient and kind manner. He treated patients in his private practice, several local hospitals over the decades, and McGuire Home and Easter Seals. He truly made this world a better place. Dr. Crumrine’s family wishes to express their gratefulness to Dr. Beant Gill, Dr. Bill Ferri, Dr. Jay Funkhouser, and Dr. George Daniels for their compassionate care of their friend and colleague. A private church service was conducted in his memory, by his dear friend, Father Carl Neely, on Monday, March 11, 2019. In lieu of flowers, donations may be made in his memory to St. Luke’s Church in Georgetown, PA 15043, where he and his family are members.

Richard Seiple Crumrine, MD, 82, of Beaver, joined his Lord and Savior Jesus Christ on Wednesday, March 6, 2019. Dr. Crumrine was son of the late Norman Ross Crumrine, MD and Elizabeth Seiple Crumrine. He was predeceased by his wife of almost... View Obituary & Service Information

The family of Richard Seiple Crumrine, MD created this Life Tributes page to make it easy to share your memories.

Richard Seiple Crumrine, MD, 82, of Beaver, joined his Lord and...

Send flowers to the Crumrine, family.