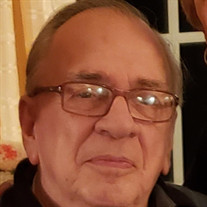 Ralph E. Cable, 86, of New Sewickley Township, New Brighton, Pa., went to his heavenly home on July 27, 2020. He was born May 18, 1934, in Rochester, Pa., son of the late George and Dorothy Cable. He had a lifelong passion and natural ability for music. He was a member of Faith Community United Methodist Church, Rochester, formerly Rochester United Methodist Church, where he served as the organist for 44 years. He was the accompanist for numerous weddings and sang in many quartets. He currently served on the Board of Trustees and over the years held various positions including president and treasurer. He was inducted into the Henry Mancini Musicians Hall of Fame on May 5, 2002, in recognition of outstanding contributions to the Musical Enrichment of the Beaver Valley. He attended Geneva College and studied Business at Penn State, Monaca. Ralph was the bookkeeper for the family business, Cable Creations Bridal and Tuxedo, Beaver Falls. Ralph was a 31 year member of Rochester Lodge #229, was a Past Master, and for many years served very competently as its Treasurer. He also played the Lodge organ for meetings and degrees. He presided over the Eureka Council Royal Arch Masons (1996) and the Beaver Valley Council of Royal and Select Masons (2000-2001) and also served as treasurer of both of those bodies. He served as the Secretary of the 37th District School of Instruction and for many years helped hold the school together with a few other past masters, who will dearly miss him or have gone ahead to welcome him. He was a 32Degree member of the New Castle Consistory, the Syria Shrine of Pittsburgh, and the Beaver Valley Caravan #18. Surviving in addition to his wife, Doris M. Cable, are four daughters, Christine Lizzi, New Brighton; Paula (Rick) Powers, Greenville; Janice (Kevin) Robinson, New Brighton; and Becky (Phil) Verrico, Ellwood City; two sisters, Judy (Carmen) Barbaro, Beaver, and Karen Culley, New Castle; also surviving are eight grandchildren, Vincent (Elexa) Lizzi, Katie (Mike) Smith, Christina Lizzi, Steven (Courtney) Lizzi, Rich (Kayte) Powers, Lauren (Joe) McIlvenny, Nicole (Andrew) Krepps, and Brooke Verrico; and six great-grandchildren, Kelsey, Donovan, Roman, and Julian Smith, Richie Powers, and Isabel McIlvenny. Due to the COVID 19 restrictions, the family is keeping services private. A private service will be held July 29, 2020 at 3:30 p.m. at the WILLIAM MURPHY FUNERAL HOME, INC., 349 Adams St., Rochester. Officiating will be Pastor Dan Miller. Interment to follow at St. John’s Burry’s Church. In lieu of flowers, donations can be made to the Faith Community United Methodist, c/o Board of Trustees, 341 Jefferson St., Rochester, PA 15074. The Rochester F&AM Lodge #229 will be holding a Masonic Service at 3 p.m. in honor of their brother.

Ralph E. Cable, 86, of New Sewickley Township, New Brighton, Pa., went to his heavenly home on July 27, 2020. He was born May 18, 1934, in Rochester, Pa., son of the late George and Dorothy Cable. He had a lifelong passion and natural ability... View Obituary & Service Information

The family of Ralph E. Cable created this Life Tributes page to make it easy to share your memories.

Send flowers to the Cable family.