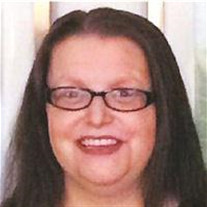 Rachael Elaine Marie Little Straub, 45, beloved wife, mother, daughter, sister, and friend, lost her third courageous battle with cancer on August 2nd, 2018. She was born in Sturgis, Michigan, on December, 28, 1972, to Gloria (Cokens) Little of Monaca, and David (Eleanor Zlatovich) Little of Myrtle Beach. Rachael was a 1991 graduate of Beaver Area High School and of the Sawyer School, where she received her degree in accounting. She was employed at Eaton, Abraxas Corporate Express, and Sky Bank. Rachael had been a volunteer her whole life. She was a Big Sister, as well as a volunteer at Beaver Public Library and Old Economy. After she became a full-time mother, she transitioned to volunteering where her children were active and was the past president, secretary, and treasurer of many youth sports organizations in the Rochester Area, where she and her family lived. She was also president of the Rochester PTA. Rachael loved acting and singing. She appeared in and directed various shows with R-ACT Theatre Productions. She is preceded in death by her sister, Mallory Alexis Little; paternal grandparents, Edward and Doris Little; maternal grandmother, Dorothy Cokens; maternal grandfather, George Cokens; her uncles, Raymond Smith, Edward Hilgendorf, Lyle Hopkins, and John Lake; her aunts, Dora Smith, Patricia Hilgendorf, June Little, and Sherry Zlatovich Barr; her godfather, Carl T. Schweitzer; her godbrother, Clay Smith; and her dear friend, Jennifer Diamond. Including her parents, Rachael is survived by her beloved husband of over 19 years, Jesse Straub. She was a loving mother to Richard and Bethany Straub, both at home; her sister, Erica (Joshua) Van Berkum, Detroit, Mich.; father-in-law, Pete Straub, Riverside; mother-in-law, Lindy Hite of Darlington; grandparents-in-law, Johnny and Sherry Hite, New Brighton; sister-in-law, Amanda (John) Jasinski; nephews, Bailey and Duncan; niece, Emma; a special aunt, Diane Little, Kansas City; her favorite cousin, Karen (Joe) Miller, Tennessee; godmother, Kathy (Leon) Smith, New Brighton; two special nieces, Natasha and Breanna Sullivan; and other beloved family. Friends will be received Sunday 2 to 4 and 6 to 8 p.m. in the WILLIAM MURPHY FUNERAL HOME, INC., 349 Adams St., Rochester, where services will be held Monday at 11 a.m. Officiating will be Sister Janice L. Campbell O.F.F. Inurnment will be in Grandview Cemetery, Beaver Falls. The family would especially like to thank the wonderful ladies who Rachael was proud to call friends. They took care of her physically and emotionally throughout her battles with cancer: Ada Icenhour, Amy Bliss, Maggie Hosch, Collen Gerace, Melissa Magby, Joann Rockwell, and Davina Enigson Phillips. We would also like to thank all the staff of Good Samaritan Hospice, especially her nurse Lynn. Rachel was an instrumental part of the Relay for Life of Brady’s Run for the past 5 years and founded Team Family Angels. To honor Rachael, the family asks for donations to be made to the American Cancer Society in lieu of flowers. Donations/ checks should be made to the American Cancer Society and mailed to the attention of Relay for Life of Brady’s Run, Team Family Angels, 320 Bilmar Drive, Pittsburgh PA 15205.

The family of Rachael Elaine Marie Little Straub created this Life Tributes page to make it easy to share your memories.