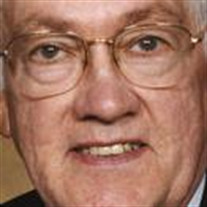 Paul W. Haynie, 88, of Cranberry Twp., formerly of Conway, passed away Monday, June 5, 2017, at his home. Born November 27, 1928, in Freedom, a son of the late Pink Webb and Minnie Effie Wallace Haynie. He graduated from Freedom High School on May 20, 1946, where he was honored to have been elected as class president. He began his 41-year banking career at age 17. He earned a Standard Certificate from the American Institute of Banking and was eventually named as the bank's Executive Vice President, member and secretary of the Board of Directors. He served as president and board member of the Beaver County Chapter, American Institute of Banking; president and board member of the Pittsburgh Chapter of the Bank Administration Institute; board member and secretary of Independent Bankers Computer Service, Beaver Falls, and president and board member of the Western Pennsylvania Safe Deposit Association; board member of the Bankers Club of Pittsburgh; president and board member of the Beaver County Bankers Association. He was a member of the former First Presbyterian Church of Freedom, where he was appointed and served as treasurer for 29 years. He was ordained as elder, served on the church's board of trustees, and was a senior high Sunday school teacher. Paul served two years in the Infantry from February 7, 1951 to January 25, 1953, including one year in Korea for which he received a Commendation Medal. He graduated from Geneva College with a degree in Business Administration in 1970, after 17 years of attending night school. He received the Distinguished Service Award from Geneva College in 2005 and the esteemed Geneva College Life G Award on May 9, 2015. He volunteered in the Geneva College institutional advancement office. He was treasurer and committee member for 10 years of the Freedom School All-Class Reunion, and served as auditor for the Oak Grove Cemetery, Freedom, for over 30 years. He was a treasurer and board member of the Beaver County Chapter of the American Red Cross; board member of the Beaver County YMCA; board member and chairman of the Patrons Committee, Beaver Valley Concert Association; board member of Homemaker-Home Health Aide Service, Inc., Beaver, and board member and treasurer of the Conway Municipal Authority. He was elected to serve on Town Council of the Borough of Conway. He was a member of American Legion Post 512, Unionville; Veterans of Foreign Wars Post 6713, Conway, and lifetime member of the Korean War Veterans Association of Western Pennsylvania. He served as treasurer and interim borough secretary for the Borough of Baden; treasurer and merit badge counselor for Conway Boy Scout Troop 428; chairman of Freedom Area "Friends of Scouting" campaigns, and member and treasurer of the former Freedom Lions Club. He was a board member and treasurer of the Northern Lights Business Association, and campaign director of the Freedom Area United Way. He was a member for over 60 year of Rochester Lodge No. 229, Free and Accepted Masons, the Scottish Rite, Valley of New Castle, and Syria Shrine Temple, Pittsburgh. Surviving are his wife of 62 years, Elaine J. (Jackson) Haynie, whom he married in 1955; a son, Terry Paul Haynie and his wife Debra, Indian Springs, Ohio; a daughter, Linda Haynie Clark and her husband Calvin, Monroeville; four grandchildren, Matthew Tyler Paul Haynie, Anna Marie Clark, David Paul Clark and Nathan James Clark; two step-grandchildren; five step-great-grandchildren, and numerous relatives and friends in his extended family. He was preceded in death by two sisters, Helen M. Edge and Thelma Sturm, and three brothers, Albert W., Raymond E. and Richard L. Haynie. Paul's request was to be cremated. His family will receive friends on Saturday from 4 to 6 p.m. in the WILLIAM MURPHY FUNERAL HOME INC., 349 Adams St., Rochester. A memorial service will be held Sunday at 4 p.m. at Sherwood Oaks, Cranberry Twp. Inurnment will be in Sylvania Hills Memorial Park. The family wishes memorial contributions be made, if desired, to Shriners Hospital for Children or Geneva College. Members of Rochester Masonic Lodge 229 F&AM will conduct a service Saturday at 5:45 p.m. in the funeral home. The Beaver County Special unit will provide full military honors Saturday at 6 p.m. in the funeral home.

The family of Paul W. Haynie created this Life Tributes page to make it easy to share your memories.

Send flowers to the Haynie family.