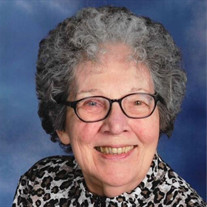 Patricia H. Wilde, 93, of New Sewickley Twp., passed away November 20, 2020 at UPMC Passavant, McCandless Twp. Born February 16, 1927 in Rochester, she was the daughter of the late Laurence and Edna Ifft Hole. She was a former employee of the Armstrong Cork, Beaver Falls. She was a member of the First Presbyterian Church, Beaver Falls, a life member of the American Contract Bridge League, a member of the Happy Bunch Square Dance Club, and Patricia loved playing card games and scrabble. She was preceded in death by her husband, James A. Wilde Jr., in 2013. She was also preceded in death by two sisters, Nancy Hacko, and Marjorie Hole. She is survived by two sons and daughters in law, James A. III, and Tracy (Alberts) Wilde, New Sewickley Twp.; Michael S. and Natalie (Blauser) Wilde, Mohnton, PA.; four grandchildren, Matthew Wilde and his girlfriend Marissa, Brett Torres, Haley Weidner, and Ethan Wilde; one great grandson, Wyatt Wilde; a sister in law, Debbie Zima, Chicago Il.; four nephews, Frank and Kenneth Hacko, Mark and Kurt Wilde, and a niece, Celia Wilde. Patricia’s wishes were to be cremated with no visitation. A memorial service will be held at a later date. Arrangements are being handled by the WILLIAM MURPHY FUNERAL HOME, INC. 349 Adams Street, Rochester. Inurnment will be at Grove Cemetery, New Brighton. The family wishes contributions be made to the First Presbyterian Church 1103 8th Ave, Beaver Falls, PA 15010. The family wants to offer special thanks to the staff at Concordia Assisted Living, Mars, PA, for the care and comfort given to our mother.

Patricia H. Wilde, 93, of New Sewickley Twp., passed away November 20, 2020 at UPMC Passavant, McCandless Twp. Born February 16, 1927 in Rochester, she was the daughter of the late Laurence and Edna Ifft Hole. She was a former employee of... View Obituary & Service Information

The family of Patricia Wilde created this Life Tributes page to make it easy to share your memories.

Send flowers to the Wilde family.