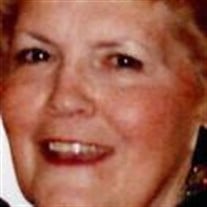 Olga L. Botinovch, 88, of New Sewickley Twp., passed away Friday, September 29, 2017, while surrounded by her loving family in Rochester Manor. Born January 2, 1929, in Isola del Gran Sasso Provincia Teramo, Italy, she was a daughter of the late Sylvestro and Concetta Fieni Ferraccio. She was a retired beautician and owner of Olga's Beauty Shop, Rochester Twp., and was also a former saleslady in the electronics department with the former Rochester Kmart. She was a member of St. Cecilia Roman Catholic Parish, Rochester. She was a loving mother, grandmother and great-grandmother. She had many wonderful friends and was a friend to everyone. Olga enjoyed playing cards in her girls' card club and Circle of Friends. She enjoyed a life well loved and well lived. She was preceded in death by her husband, Jack J. Botinovch, in 2009; a daughter, Margaret "Peg" "Maggie" Botinovch, in 2011; a son, John Jackie Botinovh, in 1976, and a sister, Mary Dinello. Surviving are two sons and a daughter-in-law, Michael S. and Jill Botinovch, Daugherty Twp., and David J. Botinovch, Rochester Twp.; a daughter and son-in-law, Donna M. and Dennis "Swede" Olson, Rochester Twp.; a former daughter-in-law, Sue Botinovch Leopardi; six grandchildren, Jessica and Ryan Reagle, Jamie and John Botinovch, Deanna, Devon and Dana Olson and Dana's fiancé Nick Joseph; a great-grandson, Nolan Reagle, and her dear friend, Eleanor Lindsey, New Sewickley Twp. Also surviving are her canine companions who she called her puppy kids, Spanky and Harlow. Cremation was Olga's desire. However, the family will receive friends Tuesday from 2 to 4 and 6 to 8 p.m. in the WILLIAM MURPHY FUNERAL HOME INC., 349 Adams St., Rochester. A Mass of Christian burial will be held Wednesday at 10 a.m. in St. Cecilia Roman Catholic Church, Rochester Twp. Inurnment will be in Sylvania Hills Memorial Park. A Christian wake service will be held Tuesday at 3:30 p.m. in the funeral home. To all those who gave care and comfort to our mother including the Rochester Manor, Mother Teresa Hospice, Joann and Dr. Gehrlein, we thank you as a family.

Olga L. Botinovch, 88, of New Sewickley Twp., passed away Friday, September 29, 2017, while surrounded by her loving family in Rochester Manor. Born January 2, 1929, in Isola del Gran Sasso Provincia Teramo, Italy, she was a daughter of the... View Obituary & Service Information

The family of Olga L. Botinovch created this Life Tributes page to make it easy to share your memories.

Send flowers to the Botinovch family.