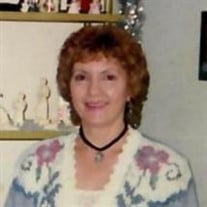 Norma J. (Halvin) Kraynie, 81, of Chippewa formerly of Freedom, passed away April 10, 2022 at Heritage Valley, Beaver. Born August 14, 1940 in Freedom, she was the daughter of the late Angelo and Mary Conrad Bartimac. She was a homemaker and housewife, Catholic by faith, and a former member of St. Felix R.C. Church, Freedom. Norma was a former housekeeper at the St. Joseph Convert and Villa St. Joseph, Baden. She enjoyed the outdoors, and being with her husband at their camp. She was preceded in death by her first husband, William Halvin in 1993, and her second husband, Melvin W. Kraynie in 2016. She was also preceded in death by two sisters and two brothers in law, Anna Mae and Emil Kampi, and Carmella and Dave Strausser and two brothers, John and Phillip Bartimac. She is survived by one daughter, Janet L. Ruckert, New Brighton; one son and daughter in law, William E. and Jan Halvin, Freedom; one step daughter, Yvonne L. Osgood, Bonita Springs, Florida; six grandchildren, Brandi, Ashley, Tyler, Heather, Sandra, and Benjamen; nine great grandchildren and one great, great, granddaughter; one sister, Stella Lorenz, Monaca, and a brother and sister in law, George & Helen Bartimac, Baden, as well as numerous nieces and nephews. Norma wishes were to have a private viewing and service (family only) on Friday, April 15, 2022 at 2 pm in the WILLIAM MURPHY FUNERAL HOME, INC. 349 Adams Street, Rochester. A Private Interment will be in Calvary Cemetery, Freedom. Memorial Contributions can be made to the Beaver County Cancer Association, Beaver Valley Professional Building, 3582 Brodhead Road, Suite 201, Monaca, PA 15061

Norma J. (Halvin) Kraynie, 81, of Chippewa formerly of Freedom, passed away April 10, 2022 at Heritage Valley, Beaver. Born August 14, 1940 in Freedom, she was the daughter of the late Angelo and Mary Conrad Bartimac. She was a homemaker and... View Obituary & Service Information

The family of Norma J. Kraynie created this Life Tributes page to make it easy to share your memories.

Send flowers to the Kraynie family.