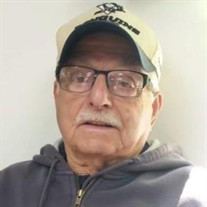 Michael T. Lodovico, 94, of New Brighton, passed away September 10, 2021 at his home. Born September 30, 1926 in Freedom, he was the son of the late Thomas and Consiglia Colaianni Lodovico. He retired as a car inspector of the Conrail Railroad, was a member of the St. Cecilia Roman Catholic Church, Rochester, Our Lady of the Valley Parish, and was a WWII Army Veteran. His whole life was loving his family, being with them and fishing; Lake Erie was his second home. He was preceded in death by his wife, Alice E. Harper Lodovico in 1987. He was also preceded in death by a son and daughter in law, Michael A. and Mary Ellen “Bee Bee” Lodovico; three brothers, Nick, Louis and Phillip Lodovico; four sisters, Elsie Rudar, Nellie Lizzi, Clara Fair, and Lucy Lodovico. He is survived by one son and daughter in law, Raymond A. and Patty Lodovico, Patterson Twp.; one daughter and son in law, Shirley A. and Randy Meny, Rochester Twp.; eight grandchildren, Ray Lodovico and his wife, Tara, Bryan Lodovico, Katie Matsko and her husband, Joey, Stephen Lodovico, and his wife, Becki, Adam Lodovico and his wife, Jen, Marc Lodovico, and his wife, Rayne, Jenna Landis and her husband, Matthew, and Chad Meny; eleven great grandchildren; a special friend, Agnes Harper, Brighton Twp., as well as numerous nieces and nephews. Friends will be received Tuesday, September 14, 2021 from 2pm to 4 pm and 6pm to 8 pm in the WILLIAM MURPHY FUNERAL HOME, INC. 349 Adams Street, Rochester. A Mass of Christian Burial will be held Wednesday at 10 AM in St. Cecilia RC Church. Entombment will follow at Sylvania Hills Mausoleum. A Christian Wake Service will be on Tuesday at 3:30 PM.

Michael T. Lodovico, 94, of New Brighton, passed away September 10, 2021 at his home. Born September 30, 1926 in Freedom, he was the son of the late Thomas and Consiglia Colaianni Lodovico. He retired as a car inspector of the Conrail Railroad,... View Obituary & Service Information

The family of Michael T. Lodovico created this Life Tributes page to make it easy to share your memories.

Send flowers to the Lodovico family.