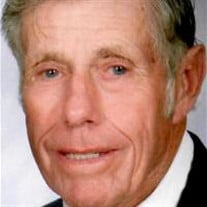 Melvin W. Eisenbrown, 84, of New Sewickley Twp., passed away Monday, April 2, 2018, in his home. Born February 7, 1934, in New Sewickley Twp., a son of the late Carl J. and Ida Belle Weil Eisenbrown, he was a retired rural mail carrier in the New Sewickley Twp area for 30 years. Melvin farmed in New Sewickley Twp. all of his life. He attended Freedom Area High School and was a member of the New Sewickley Presbyterian Church, where he sang in the church choir for many years, served as an elder on the Board of Trustees and was a Session chairman. He was also a member of the New Sewickley Twp. Municipal Authority. He served 16 years as the president of the Big Knob Antique Tractor and Equipment Club and was a member of the International Cockshutt Club, having served as the director for eight years. Surviving are his wife of 58 years, Beverly E. Crowe Eisenbrown, whom he married May 16, 1959; a son and daughter-in-law, James and Lori Eisenbrown; three daughters and two sons-in-law, Jodi and Phil Miller, Diane Brooks, and Donna and Bob Throm; six grandchildren, Brittany Lloyd and her husband Matt, Jarod Eisenbrown and his wife Jenn, Kayla Salvino and her husband Brendan, Alexa Eisenbrown, Kelsey Nassy and her husband Demitrius, and Quinton Throm; two great-grandchildren, Clint Salvino and Jacob Eisenbrown; numerous nieces and nephews, and two sisters-in-law, Eleanor and Grace Eisenbrown. He was preceded in death by three brothers, Lester, Norman and Elmer Eisenbrown, and two sisters and brothers-in-law, Hazel and Kenneth Ruckert, and Alma and Roy Bradshaw. Friends will be received Wednesday and Thursday from 2 to 4 and 7 to 9 p.m. in the WILLIAM MURPHY FUNERAL HOME INC., 349 Adams St., Rochester, and Friday from 10 a.m. until the time of services at 11 a.m. in the New Sewickley Presbyterian Church. His pastor, Rev. Dennis Burnett, will officiate. Interment will be in Pinewood Memorial Gardens. The family wishes memorial contributions be made to the Memorial Fund of the New Sewickley Presbyterian Church, 101 Big Knob Road, Rochester, PA 15074. The family would like to give a special thanks to all of the friends that were there for Melvin and especially Family Hospice for such great care and support.

The family of Melvin W. Eisenbrown created this Life Tributes page to make it easy to share your memories.

Send flowers to the Eisenbrown family.