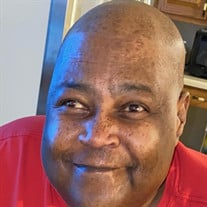 Mark A. “Rosie” LaVette, 55, of Patterson Twp., formerly of Rochester, passed away January 12, 2022 at Heritage Valley, Beaver. Born January 20, 1966 in Rochester, he was the son of the late James H. and Henrietta Banks Everson LaVette. He was a disabled Clerk in the former Medical Center, Beaver for 15 years, worked as a D.J. and a member for the PA. Association of the Blind. Mark was on dialysis for 22 years, however, he never allowed it to interfere with his love for family, he always touched the people he met and left his mark of friendship on them. He is survived by a daughter, Alyssa Lee LaVette, Monaca. He is also survived by a sister, Monica M. LaVette, Rochester; four brothers and two sisters in law, Shaun and Crystal LaVette, Greer, South Carolina, Steven “Wee Wee” and Diane LaVette, Rochester, Michael D. LaVette, Pittsburgh, and Corey LaVette, Rochester; three step brothers, Andrew and Paul Everson, Rochester, and Paul Allen Everson, Beaver Falls; one step sister, Pia Everson, Rochester, and a host of nieces, nephews, and great nieces and great nephews. He was preceded in death by one brother, James LaVette; his paternal grandparents, Sparky LaVette and Daisy LaVette Glover and his Maternal grandmother, Margaret Banks. Friends will be received Friday, January 21, 2022 from 9am to 11am in the Holy Spirit Fellowship Church, 1101 6th Street, New Brighton, with a service following at 11:15 AM, Rev. O’Shea Vreen, Jr. will officiate. Arrangements are being handled by the WILLIAM MURPHY FUNERAL HOME, INC. 349 Adams Street, Rochester.

The family of Mark A. LaVette created this Life Tributes page to make it easy to share your memories.

Send flowers to the LaVette family.