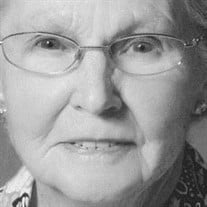 Margaret E. Knox, 92, of Rochester Township, passed away Thursday, November 5, 2015, in Trinity Oaks Personal Care Center. Born August 15, 1923, in Rochester, a daughter of the late Roy F. and Edna Young Corless, she was a homemaker and a member... View Obituary & Service Information

The family of Margaret E. Knox created this Life Tributes page to make it easy to share your memories.

Send flowers to the Knox family.