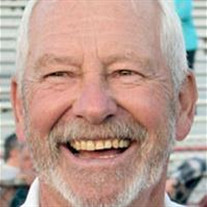 On Monday July 30, 2018, Louis N. Vargo, age 72, passed away surrounded by his loving family. He was preceded in death by his parents, Louis P. and Gladys M. Vargo. Louis showed an unbelievable amount of love to his wife of 50 years, Jane (Wallace) Vargo. Together they raised two strong, independent, hard-working children, Louis F. Vargo and Tawnya (Vargo) Jones. The two of them along with their spouses, Georgia Vargo, and Rick Jones gave Louis the title of “proud grandfather” to Niki Vargo, Courtney Vargo, Ryan Jones, Megan Jones, and Andrew Vargo. Louis cherished the time he spent watching his grandchildren grow into the unique individuals that they are. He was never happier than when he was watching Ryan play ball, Megan twirl her baton, or Niki and Courtney starting their careers. He was there for every accomplishment and gave unconditional support every step of the way. Louis can rest knowing that his children and grandchildren have a bright future because they are following in his footsteps. He enjoyed wood-working, painting, restoring antiques, spending time with family and his baby Bella. He has taught us the importance of family and what true love is, how hard work pays off and most importantly that we will have our biggest fan watching over us. Louis is a part of us all; his talent will be carried on by his son, Louis and grandson, Ryan and his personality will always shine through his daughter, Tawyna. We couldn’t have asked to be blessed with a better husband, father, or grandfather. It is said that you don’t choose your family; they are God’s gift to you. Now, Louis is our gift to God and he has the ability to make heaven beautiful. A Private Committal Service will be held Thursday at Sylvania Hills Mausoleum Chapel, with interment to follow. Arrangements are entrusted to the WILLIAM MURPHY FUNERAL HOME, INC., 349 Adams St., Rochester. We would like to thank the entire staff at Allegheny Health Network for the unconditional care that Louis received as well as the New Sewickley Township First Responders. Contributions, if desired, can be made to New Sewickley Twp. First Responders of Choice.

On Monday July 30, 2018, Louis N. Vargo, age 72, passed away surrounded by his loving family. He was preceded in death by his parents, Louis P. and Gladys M. Vargo. Louis showed an unbelievable amount of love to his wife of 50 years, Jane (Wallace)... View Obituary & Service Information

The family of Louis N. Vargo created this Life Tributes page to make it easy to share your memories.

Send flowers to the Vargo family.