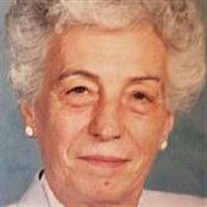 Lillian C. Dally, 95, formerly of Beaver and New Sewickley Twp., passed away Friday, November 10, 2017, in Providence Health Care Center, Beaver Falls. One of ten children, Lillian was born on March 25, 1922, in Brackenridge, Pa., the daughter of the late Albie and Margaret Grimm Morford. Hers was a full life and until near the end she always did things her way, in her time, and most often for others. She was a caregiver for grandchildren and other relatives and friends. As a camp ground host in Pymatuning, she could be seen riding a moped around the grounds and enjoyed many lifelong friendships there. The camp, which she and her husband built near Tionesta, became a home away from home with magnificent memories and wonderful times that developed over the years and is still enjoyed by family today. In more recent years, she became the matriarch at the Dally Family Reunions and looked forward to road trips visiting old stomping grounds with her siblings from Florida a couple of times a year. Formerly she was a floral designer with Sheldon’s Flowers in Rochester. She was preceded in death by her husband, Ernest A. Dally Sr., after 46 years of marriage in 1986; one son, Ernest A. Dally Jr., 2013; a son-in-law, Eugene Moore, 2014; five sisters; and one brother. Surviving are two daughters, Audrey Truax and Janice Moore; a daughter-in-law, Birdie Dally; seven grandchildren, Shawn Moore, Dawn Zassick and her husband Bill, Todd Truax and his wife Jacquie, Julie Ballard and her husband Bill, Jenny Truax, Janel Sabatino and her husband Kevin Purdy, and Sandy Avery and her husband Steve; seven great-grandchildren, Dylan Smith, Justin and Jordan Truax, and Sophia, Olivia, John and Judah Avery; her brother, Howard Morford and his friend Josie Lozaca; and two sisters, Bernice Bender and Marian Pipes. Per her request, there will be no visitation. A memorial service will be announced at a later date. The family wishes to thank all of the staff at Providence Health Care and the hospice staff for their outstanding excellent care and support and for the loving empathy of many residents and their families to Lillian and her girls. The family wishes memorial contributions to New Hope Evangelical Lutheran Church, 200 2nd Avenue, Freedom, PA 15042. Arrangements are by the WILLIAM MURPHY FUNERAL HOME, INC., 349 Adams St., Rochester.

The family of Lillian C. Dally created this Life Tributes page to make it easy to share your memories.

Send flowers to the Dally family.