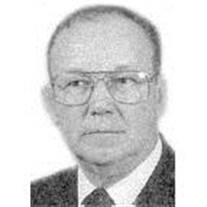 James R. Smith, 83, of Rochester Twp., passed away Tuesday, August 25, 2015, in Rochester Manor. Born July 15, 1932, in Rochester, a son of the late Archie Lester and Sarah Louise Ahrens Smith, he was a retired employee of Armco Steel, Ambridge, and was a former employee of the Lutton Funeral Home in Beaver Falls and Chippewa Twp. He was a member for over 50 years of the Chippewa United Methodist Church, where he had served as an usher. Jim enjoyed golfing, hunting and woodcraft work. Surviving are two daughters and a son-in-law, Pam Smith, Darlington, and Valerie and Eric Daniels, Lower Burrell, Pa.; three grandchildren; a sister, Edith M. Meteney, Rochester Twp., with whom he resided; a brother and sister-in-law, Archie W. and Lois Smith, New Brighton; a loving niece, Margie Plocinik, New Brighton; a nephew, Brian Smith, Wooster, Ohio, and several grandnieces and grandnephews. He was preceded in death by a brother-in-law, Louis Meteney, in 1985. His desire was to be cremated and have no viewing. Friends are invited to attend a memorial service on Saturday at 11 a.m. in the Chippewa United Methodist Church, with associate pastor, the Rev. Gary Hilton, officiating. Arrangements by WILLIAM MURPHY FUNERAL HOME INC., 349 Adams St., Rochester.

The family of James R. Smith created this Life Tributes page to make it easy to share your memories.