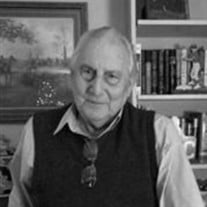 ROCHESTER TWP. - James M. Mannion, 81, of Rochester Twp., passed away March 13, 2022 at Good Samaritan Hospice, Beaver. Born February 2, 1941, in Rochester, Pa. The son of the late Herbert R. and Mary E. Seidler Mannion. Jim was a retired employee with the former Republic Steel, Beaver Falls, Pa. He was a member of St. Cecilia Roman Catholic Church, Our Lady of the Valley Parish, Rochester. Jim was a member of the Beaver Valley Choral Society, where he was a former board member. He performed with the Men of Melody visiting various nursing homes. He had been active in St. Michael the Arch Angel Roman Catholic Church, Clearwater, Florida. He was a retired member and officer with the Rochester Volunteer Fire Department. He was a 1958 graduate of Rochester High School, where he was involved in the musicals under the direction of Phil Inman, and was active with the Rochester High School Marching Band organization. He performed yearly with the Mt. Gallitzan Operatas. He was a former leader of St. Cecilia’s Church Resurrection Choir with which he just completed 75 years. He was a peace time Air Force veteran. Jim is survived by his wife and best friend, Cindy L. Martin Mannion. Also survived by three sons, Michael J. Mannion, Beaver Falls, Richard A. Mannion, Industry, Jeffrey S. Mannion, Ellwood City. He was very proud of his adult grandson Tyler Mannion and his wife Abby of Pittsburgh, and his beloved twin grand children, Connor J. and Alessia G. Mannion, Ellwood City. One brother and sister in law, Daniel and Carol Mannion, Conway, two nieces, Judith Boyle and Susan L. Mannion, of Port St. Lucie, Florida, a nephew, Thomas Mannion, Greene County, Pa. He was preceded in death by two brothers, Patrick and Thomas Mannion, a mother in law, Ellen Martin, and a brother in law , Stephen Martin. Friends will be received Wednesday from 2-4 and 6-8 in the William Murphy Funeral Home, Inc. A wake service will take place Wednesday at 3:30 in the funeral home. A mass of Christian Burial will take place Thursday at 10 a.m. at St. Cecilia Roman Catholic Church, Rochester.

The family of James M Mannion created this Life Tributes page to make it easy to share your memories.

Send flowers to the Mannion family.