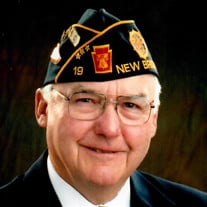 James A. Dunbaugh Sr., 90, of Daugherty Twp., passed away Sunday, November 3, 2019, unexpectedly at Heritage Valley Beaver, surrounded by his loving family. He was born July 17, 1929, in Rochester, a son of the late Earl and Catherine Wise Dunbaugh. James was a retired employee of the former St. Joe Lead Co. in Potter Twp. and a member of St. Cecilia Roman Catholic Parish, where he was a former usher. He was a life member of the Daugherty Township Volunteer Fire Department and a 1947 graduate of Rochester High School. He was a U.S. Army Veteran of the Korean War, serving with the Third Infantry Regiment, (the Old Guard), one of the oldest and most respected infantry regiments in the U. S. Army. It is the Army’s official ceremonial unit and escort to the president of the United States. Soldiers of the Old Guard, maintain 24-hour vigil at the Tomb of the Unknown Solider and provides military funeral escorts at Arlington National Cemetery. James was a member of the New Brighton American Legion, Post 19 for 38 years and was a former commander from 2001 to 2003. He was a board member of the Upper Beaver Valley Veteran’s Association and was retired as acting President in 2017 and 2018. He was an avid golfer and belonged to numerous golf leagues. He was preceded in death by his wife, Delores J. (Henstock) Dunbaugh. He is survived by two daughters, Sue Ann Musgrave of Monaca and Pamela J. Dunbaugh of Ohioville; two sons and daughters-in-law, James A. Jr. and Adele Dunbaugh of Greenville, S.C. and Keith A. and Becky Dunbaugh of Daugherty Twp.; six grandsons, Kenneth L. Musgrave Jr. of Beaver, Kevin B. Musgrave and Craig J. Musgrave and his wife, Violet, both of Monaca and James A. Dunbaugh III and Brian C. Dunbaugh, both of Greenville, S.C. and Alex J. Dunbaugh Savannah Ga.; four great grandchildren, Aiden, Declan, Kenny and Lyla Musgrave; a sister-in-law, Juanita, Sis” Nichol; numerous nieces, nephews, special neighbors, many friends and his faithful canine companion, Shamrock. In addition to his parents he was preceded in death by a son-in-law, Kenneth L. Musgrave Sr.; a sister-in-law, Althea Mason and two brothers-in-law, Paul Mason and Robert Nichol Friends will be received Wednesday, November 6, 2019, from 6 to 8 and on Thursday from 2 to 4 and 6 to 8 p.m. at WILLIAM MURPHY FUNERAL HOME INC., 349 Adams St., Rochester. A Mass of Christian burial will be held on Friday at 10 a.m. at St. Cecilia Roman Catholic Church, Rochester Twp. Interment will be at Sylvania Hills Memorial Park, The Beaver County Special Unit will provide full military honors on Friday at 11:15 a.m. at the cemetery. The family wishes memorial contributions be made to St. Cecilia Parish, 628 Virginia Ave., Rochester, PA 15074 or the Beaver County Humane Society.

James A. Dunbaugh Sr., 90, of Daugherty Twp., passed away Sunday, November 3, 2019, unexpectedly at Heritage Valley Beaver, surrounded by his loving family. He was born July 17, 1929, in Rochester, a son of the late Earl and Catherine Wise Dunbaugh.... View Obituary & Service Information

The family of James A. Dunbaugh Sr. created this Life Tributes page to make it easy to share your memories.

Send flowers to the Dunbaugh family.