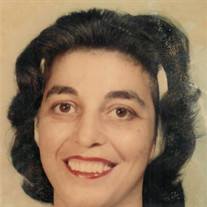 Isebell N. Martin Morton, 84, of Cary, North Carolina, formerly of Freedom and Georgia, passed away on January 5, 2020, at her home. She was born March 13, 1935, in Freedom, a daughter to the late Emanuel and Anna Morelli Martin. She was a retired employee with the DeKalb County School District and worked for 17 years in the Stone Day Care School, Decatur Georgia, as a kindergarten teacher. She was a former member of St Felix Roman Catholic Church, Freedom and a former member of St. Thomas More Roman Catholic Church, Decatur Georgia. She was also a member of the Decatur Georgia VFW Auxiliary. She was preceded in death by her husband, Richard E. Morton in 1974; two brothers, Alfred Martin and Alvin Martin Sr. and three sisters, Madeline Martin Barr, Edith R. Martin and Lillian Martin Doughtery. She is survived by two daughters and a son-in-law, Lou Anne Morton, of Clarksville, Georgia and Donna T. and Fred Perry of Cary, North Carolina; three grandchildren, Natalie McCrea Hall and her husband, James of Clarksville Ga. and Amelia Diane Stone and Andrew Jonathan Stone, both of Atlanta Ga.; two great grandchildren, Abigail Lillian Hall and Fiona Caroline Hall; three sisters, Viola Martin of Freedom, Ann Martin Young of New Brighton and Jean Martin Kisic of Patterson Heights; one brother and sister-in-law, William ‘Bill’ and Dorothy Martin of Conway; a godchild, Alvin Martin Jr. and his wife, Karen of Freedom, and numerous nieces, nephews and cousins. Friends will be received on Friday, January 10, 2020, from 2 to 4 and 6 to 8 p.m. at WILLIAM MURPHY FUNERAL HOME INC., 349 Adams St., Rochester. A Mass of Christian burial will be held on Saturday at 10 a.m. at St Felix Roman Catholic Church in Freedom where everyone is requested to meet. Private interment will follow in Calvary Cemetery Freedom A Christian wake service will be held in the funeral home on Friday at 3:30 p.m. Memorial contributions may be made to the American Cancer Society, 320 Bilmar Dr., Pittsburgh, PA 15205.

Isebell N. Martin Morton, 84, of Cary, North Carolina, formerly of Freedom and Georgia, passed away on January 5, 2020, at her home. She was born March 13, 1935, in Freedom, a daughter to the late Emanuel and Anna Morelli Martin. She was a retired... View Obituary & Service Information

The family of Isebell N. Morton created this Life Tributes page to make it easy to share your memories.

Send flowers to the Morton family.