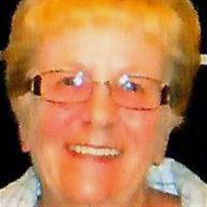 Irene F. Roman, age 74, of Rochester Township, passed away Saturday, December 15, 2018, at Good Samaritan Hospice, Beaver. Irene was born February 23, 1944, in Wellingborough, England. She was the daughter of the late Frank and Florence Saunders Frost. She was a retired owner and manager of Art’s Pizza Shop, Rochester, and the Stonewall Country Restaurant and Deli, New Sewickley Twp. She was Catholic by faith. Irene loved camping and was a former dog trainer in Center Twp. She is survived by her husband of 48 years, Thomas J. Roman. Also surviving is a son, Craig T. Roman and his significant other Nicole Onderko, Jamestown, Pa.; three daughters and sons-in-law, Tracey and Robert Petroff of Freedom, Paula and James Will of Brighton Twp., and Nicky Roman and her husband Brian Robison of Beaver; and seven grandchildren, Ashley Deemer, Chandler and Alexis Teney, Allison, Brandon and Taylor Petroff, and Jennarae Roman. She was preceded in death by a granddaughter, Chelsey Roman, and one brother, Robert Frost. Friends will be received on Tuesday from 2 to 4 and 6 to 8 p.m. at the WILLIAM MURPHY FUNERAL HOME, INC., 349 Adams St., Rochester, where a blessing service will follow at 8:30 p.m. Officiating will be Father Bob Miller. Interment will be in Mt. Olivet Catholic Cemetery, Hopewell Twp. The family wishes contributions to be made to St. Jude Children’s Hospital, 501 St. Jude Place, Memphis, TN 38105.

The family of Irene F. Roman created this Life Tributes page to make it easy to share your memories.

Send flowers to the Roman family.