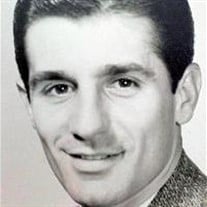 Howard F. “Sarge” Alberts, 89, of Monaca Heights, passed away Friday, June 21, 2019, in Good Samaritan Hospice Beaver. Born June 25, 1929, in Rochester, a son of the late Howard S. and Natalina S. Verga Alberts, he was a retired high school teacher with Center Area High School, where he taught for 40 years. He was a member of the Grace Evangelical Lutheran Church, Rochester and an Army veteran of the Korean War. He was a 1947 graduate of Rochester High School and a 1951 graduate of Geneva College, where he received his BS degree in Education. He served for 31 years as the Center High School Athletic Director. He was the boys golf coach for 31 years, basketball coach for 16 years, girls golf coach for five years and was the summer recreation director for over 20 years. He was first hired at Center as a health and physical education teacher. He was a member of the PSEA, NEA, the Athletic Directors Association, and the MAC Coach’s Association. He was a committee member for 25 years on the Beaver County Hall of Fame and was inducted into the Hall of Fame in 2012 as athletic director. He was named Athletic Director of the Year in 1993 in Region 4. He was an avid golfer for over 60 years and was a 38-year member of the Turner’s Golf League and a life member of the Monaca American Legion and Monaca Turners. Sarge was very proud that the school named the football stadium after him, “Sarge Alberts Football Stadium.” He is survived by his wife of 61 years, Theresa A. Dimitrovich Alberts; two daughters and sons-in-law, Carol A. and Chuck LaValle, Center Twp.; Christine and Scott Hickam, Dallas, Texas; four grandchildren, Nicole Schmidt and her husband, Matt, Beaver; Matthew LaValle, Dormont, Pa.; Jason Hickam and his wife, Kelly and Ryan Hickam, both of Kansas City, Kans.; four great-grandchildren, Carter, Austin, Peyton, and Aria; three nephews, David and Michelle Manes, Gary and Becky Manes and Michael and Marcee Klixbull, and their children; a sister-in-law and brother-in-law, Norma and Bill Klixbull; several cousins including Ben Thomas, Stanley Willis, David Guinn and Verga Cousins from Ohio. He was preceded in death by two sisters, Rose “Sissy” Manes and Barbara E. “Babs” Alberts. Friends will be received Monday from 6 to 8 p.m. and Tuesday from 2 to 4 and 6 to 8 p.m. in the WILLIAM MURPHY FUNERAL HOME INC., 349 Adams St., Rochester. A service will be held on Wednesday at 11 a.m. in the Grace Evangelical Lutheran Church, Rochester. His pastor, the Rev. Gregory S. Clagg will officiate. Private interment will be in St. John’s Cemetery, Monaca. The family wishes memorial contributions, in Sarge’s memory, be made to the American Heart Association.

The family of Howard F. "Sarge" Alberts created this Life Tributes page to make it easy to share your memories.

Send flowers to the Alberts family.