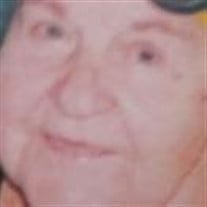 Helen Guy, 99, of Passavant Retirement Community, Zelienople, died on July 22, 2017. Born in Monaca, on August 26, 1917, she was a daughter of the late Anna and Adolph Birner. Helen graduated from Monaca High School in 1935. Her high school year book appropriately had the title "Athlete" under her senior picture. After graduation, Helen attended nursing school at Sewickley Valley Hospital and earned her RN diploma. Helen loved being a nurse. She was a natural. Helen proudly served our country as an Army nurse during World War II. She was a Second Lieutenant serving from January 1941 until July of 1944, serving first at Fort Lewis, Washington, and later in Puerto Rico. This veteran had such delight in her service that she kept her uniform in her closet until she died. In addition to Helen's parents, she was preceded in death by her first husband, Herman Zachman; a son, Charles Zachman; her second husband, Elmer Guy; a sister, Agnes Wooley and brothers, Dutch Birner, Frank Birner, and Carl Knoblauch. Helen and Elmer enjoyed years of interesting travel and had great fun together throughout their retirement. When they were home, Helen maintained her passion for swimming at the Beaver County YMCA. Until she was 89 years old, she swam two miles a day, six days a week. Over the years, the "Y" has recorded Helen swimming over 8,000 miles. The years she and Elmer shared were of great blessing to each of them. They were members of the New Sewickley Presbyterian Church. She is survived by a daughter, Patricia Vernon Farrell, Beaver; three grandsons, Todd Majors (Christine), Beaver; T.L. Vernon (Kari), Worthington, Ohio, and Tim Vernon, Pittsburgh; five great-grandchildren, Sara Majors, Noah Majors, Mia Vernon, Emma Vernon and Levi Vernon. Surviving nieces are Lois Evans, Beaver; Mare Knoblauch (Ron Friedl), Bridgeville, Del; Donna Vogel (Paul), Zelienople, and Glennda Alcaraz, Denver, Colo. In addition to her family, Helen will be greatly missed by Bea DeLozier, her closest friend at Passavant. A memorial service will be held at Seaman Memorial Chapel located in the Abundant Life Building at Passavant Retirement Community, Zelienople. The service will be held on Monday, July 31, 2017, at 11 a.m. Pastor Wilfred Goetze will officiate. In lieu of flowers, the family suggests donations be made to the Beaver County YMCA, 2236 3rd Avenue, New Brighton, PA 15066, in memory of Helen Guy. The family would like to thank all of Helen's caregivers at Passavant and VNA Hospice who were so competent, kind, and loving. To us, you are truly gifts from God. Arrangements have been entrusted to the WILLIAM MURPHY FUNERAL HOME INC., 349 Adams St., Rochester.

Helen Guy, 99, of Passavant Retirement Community, Zelienople, died on July 22, 2017. Born in Monaca, on August 26, 1917, she was a daughter of the late Anna and Adolph Birner. Helen graduated from Monaca High School in 1935. Her high school... View Obituary & Service Information

The family of Helen Guy created this Life Tributes page to make it easy to share your memories.

Send flowers to the Guy family.