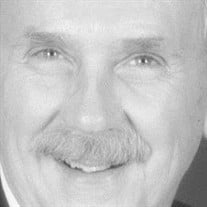 George A. Anderson, 79, of Brighton Twp., passed away Saturday, November 14, 2015, at his residence after a courageous battle with pancreatic cancer. He was born Sept. 3, 1936, in Lyndhurst, Ohio, a son of the late Aldrich B. and Ellen Jenkin Anderson. He was a retired district superintendent for the Haughton Millar Schindler Elevator Company where he worked for 40 years. He was Lutheran by faith. George served in the U.S. Coast Guard enjoying the opportunity to sail on the Coast Guard ship "Eagle" to Bermuda and returned ahead of a hurricane. He was an Eagle Scout and became a Weblo Leader in Elmira, New York, where he was the local representative for Haughton Elevator. In Sterling Heights, Michigan, he coached a winning basketball team for the city league 12 year olds. George was a longtime member of the H.C. Fry Glass Society, West Virginia Museum of American Glass in Weston, WV and was vice president and treasurer of the Beaver Falls Historical Society and Museum. He was an avid hunter and fisherman. He was most happy when in the forest at Forest Lake, MI. He accomplished most of his bucket list while driving to Alaska after first retiring and then enjoyed his 15 years of retirement with his wife by his side. He is survived by his wife, Elizabeth "Betty" (Lynn) Anderson. He will be sadly missed by his two sons, Jeffrey Lynn Anderson and his wife, Laura, Parma, OH, and James Aldrich Anderson, Seattle, WA; five grandchildren, Kathryn Lynn Anderson, Alexander Lewis Anderson, Ian Aldrich Lazo Anderson, Jacqueline Kay Forbus, and Kelly Lynn Forbus; a sister, Margery Anderson; a sister-in-law, Joy D. Hohbach, and her fiancé Stephen Schaffer; a niece, Joelle Kerbuay and her husband Dan, and nephews, James E. Hohbach II and Guy Pinneo and his wife, Janet; a cousin, Richard Walters and his children, Heather and Lisa, and numerous close and dear lifelong friends in Michigan and Pennsylvania and cousins in Cleveland and England. He was preceded in death by two brothers-in-law, James Hohbach and Charles H. Lynn II and his mother-in-law and father-in-law, Charles and Elizabeth Lynn. Friends will be received Friday from 2 to 7 p.m. in the WILLIAM MURPHY FUNERAL HOME INC., 349 Adams St., Rochester, where a service will be held Friday at 7:30 p.m. Officiating will be the Rev. Gregory S. Clagg of the Grace Evangelical Lutheran Church, Rochester. A private family interment will be held later at the Western Reserve Memorial Garden, Chesterland, Ohio. Friends are asked to make contributions to the Beaver Falls Historical Museum in care of the Carnegie Free Library, 13th St. & 7th Ave., Beaver Falls, PA 15010. The family wishes to thank the nurses from Concordia and Good Samaritan Hospice and Dr. Stewart Lancaster for their compassion and care for George.

George A. Anderson, 79, of Brighton Twp., passed away Saturday, November 14, 2015, at his residence after a courageous battle with pancreatic cancer. He was born Sept. 3, 1936, in Lyndhurst, Ohio, a son of the late Aldrich B. and Ellen Jenkin... View Obituary & Service Information

The family of George A. Anderson created this Life Tributes page to make it easy to share your memories.

Send flowers to the Anderson family.