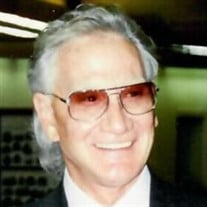 Federico (Fred) Emilio Liberatore of Rochester peacefully passed away at the age of 90 on January 22, 2021, with his daughter, Rebecca by his side. Fred is preceded in death by his loving parents, Elvina and Eugene Liberatore, his wife, Bette, Brothers, Arnold and Eugene, and Sisters, Agatha Paul, Josephine Clayton, Neva Clark and Leah Hoffmeier. He is survived by his brother and best friend, Jack Liberatore. He is also survived by his daughters, Linda Liberatore, Debbie Dunning, Shari (Frank) Grana, Rebecca Liberatore, Jeanine Liberatore, a great niece, Fiona Greathouse, and two step children, Erin Kline and Adam Ryan. He also has grandchildren, Briannon, Jade and Quinn, and great grandchildren, Izabella, Carlo, and Samuel. In addition Fred has been loved by many nieces, nephews, and cousins. Fred was born in Coraopolis, but lived the majority of his life in California where he ran Libco Painting and a Schwinn Bike Shop. He never missed a western movie. John Wayne was his favorite. He was a horse owner, loved riding, and you could always find him at the race track. He ran a successful painting company, Libco painting and also his Schwinn bike shop. At the age of 14 Fred began riding the railroads and made yearly trips to the hobo convention in Britt Iowa. In 2011 was crowned the Hobo King. His travels took him across the United States and saw much of our wonderful land. He rubbed elbows with Hollywood producers teaching them about the Hobo life. He was in a documentary (The American Hobo 2003) and a few movies. Fred’s charm and charisma was an undeniable characteristic. He was an intimate storyteller. He had the ability to draw you in and hold your attention and never disappointed for his stories were filled with adventure and humor. He always had a laugh or a joke to tell. He eventually married Bette Ryan and relocated to Minneapolis Minnesota. Upon her passing, Fred moved back to Rochester to be closer to family and live his final years. This fun-loving larger than life Man, Father, Coach, Teacher, Storyteller Extraordinaire, Cowboy, Son, Brother, Father in law, Grandfather, Sportsman, Steelers Fan, King Hobo, Husband, Friend, Defender, Counseler, Dancer, among many other attributes has caught the westbound train for his final adventure. He has touched many lives and is forever in our hearts. Fred’s wishes were to be cremated with no viewing. Friends are invited to attend a Mass of Christian Burial, Thursday, January 28, 2021 at 10 am in the St. Cecilia R.C. Church, Rochester Twp., Our Lady of the Valley Parish. Inurnment will follow in St. Cecilia Cemetery. Arrangements are being handled by the WILLIAM MURPHY FUNERAL HOME, INC. 349 Adams Street Rochester.

Federico (Fred) Emilio Liberatore of Rochester peacefully passed away at the age of 90 on January 22, 2021, with his daughter, Rebecca by his side. Fred is preceded in death by his loving parents, Elvina and Eugene Liberatore, his wife, Bette,... View Obituary & Service Information

The family of Fred E. Liberatore created this Life Tributes page to make it easy to share your memories.

Send flowers to the Liberatore family.