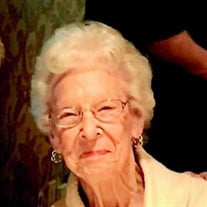 Edna Eleanor “Mueller” Emrick, 93, of New Brighton, passed away March 24, 2021 peacefully at her home. Born October 28, 1927 in Rochester, she was the daughter of the late Walter and Birdie Williams Mueller. She attended Rochester High School where she met the love of her life, the late George A. Emrick, carrying his books home from school. They married on December 20, 1947 and settled in New Brighton. Her early work history at a law firm afforded her the luxury of shoes and matching purses. Edna was an active member in the New Brighton United Methodist Church, the New Brighton Lioness and later the Lion’s Club. She was also a member of the New Brighton Lighthouse of the Blind, serving as president of their auxiliary, also a board member and hobby group. Edna and George enjoyed traveling and took many vacations including England, Hong Kong, Hawaii, and all over the United States. She enjoyed her “Mountainbrook” Camp at Tionesta, snowmobiling, casinos, and cheering for the Steelers. She is survived by five daughters and sons in law, Christina and Wayne Loschinskey, Kathy and Tom Rimbey, Paula and Bill Wagoner, Gretchen and Bill Dvorzak, and Lisa and Bruce Weaver; ten grandchildren, Dave Loschinskey and his wife Jenifer, Kim Walker and her husband Jason, Mike Loschinskey and his wife Jaime, Kristy Burke and her husband Jon, Justin Rimbey and his wife Summer, Brian Wagoner and his wife Becca, Tracy Logan and her husband Robert, Adam Dvorzak and Leah Rice, Jessie Dvorzak and Ted Alden, and Abby Weaver; twenty two great grandchildren, who referred to her lovingly as “GG,”; a sister in law, Virginia Waite and numerous nieces and nephews. Edna was preceded in death by seven sisters and three brothers, Helen Mueller, Dorothy Zahn, Mabel Baker, Myrtle Costa, Mary Lou Hall, Anna Mae Kather, Vivienne Nicely, and Walter, Robert, and Clyde Mueller. Friends will be received Sunday, March 28, 2021 from 2-4 and 6-8 at the WILLIAM MURPHY FUNERAL HOME, INC. 349 Adams Street, Rochester. Services will be held Monday at 11 AM in the New Brighton United Methodist Church, officiating will be her pastor, Rev. Gary Hilton. With all attending visitation and service, face masks and social distancing are required due to the Covid 19 concerns. Private interment will be at Grove Cemetery, New Brighton. The family wishes in lieu of flowers, memorial contributions be made to the New Brighton United Methodist Church, 1033 6th Avenue, New Brighton, PA 15066.The family deeply appreciates the compassionate care given by her caregivers, Kathy, Lindsay, Cheryl, Pam, Kay, Angela, and Anova Hospice, especially Karen for their devotion and pampering. “When tomorrow starts without me, do not think we are far apart, for every time you think of me, I am right here in your heart.”

Edna Eleanor &#8220;Mueller&#8221; Emrick, 93, of New Brighton, passed away March 24, 2021 peacefully at her home. Born October 28, 1927 in Rochester, she was the daughter of the late Walter and Birdie Williams Mueller. She attended Rochester... View Obituary & Service Information

The family of Edna E. Emrick created this Life Tributes page to make it easy to share your memories.

Send flowers to the Emrick family.