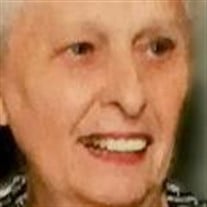 Dolores J. 'Dee' Basile, 83, of New Sewickley Twp., passed away peacefully Tuesday, July 12, 2016. Born April 12, 1933, in Ellwood City, a daughter of the late Dominick and Rosina DePasquale DeSimone, she was a retired secretary treasurer with the former Valley TV and Appliance Store, East Rochester and a former employee of Walmart, Center Twp. She was a member of St. Cecilia Roman Catholic Parish, Rochester and Christian Mothers and Welcoming Committee within the church, where she enjoyed the many fish fry's and being the five o'clock greeter. Dee was a wife, mother, and grandmother, sister and friend who wove a colorful tapestry of life that was held together with threads of love and her faith. May God keep her in the palms of his hands until we meet again. She was preceded in death by her husband, Joseph A. Basile, 2004; four sisters, Helena DeSimone, Mary DeMarco, Nancy Mannerino and Rosetta Mitchell, and two brothers, Eugene and Joseph DeSimone. Surviving are one son, John J. Basile, Philadelphia; a daughter and son-in-law, Jodean M. and David Brooks, Beaver Falls; one grandson, Jeremiah D. Brooks and his wife, Rebecca, Pittsburgh; a sister-in-law, Helen DeSimone, Beaver Falls and numerous nieces and nephews. Friends will be received Friday from 2 to 8 p.m. in the WILLIAM MURPHY FUNERAL HOME INC., 349 Adams St., Rochester. A Mass of Christian burial will be held Saturday at 10 a.m. in St. Cecilia Roman Catholic Church, Rochester Twp. Interment will follow in St. Cecilia Cemetery. A Christian wake service will be held in the funeral home on Friday at 3:30 p.m. The family wishes memorial contributions be made to the Christian Mothers of St. Cecilia, 628 Virginia Ave., Rochester, PA 15074. A special thanks is given to her beloved niece, Rosemarie Malic, for the care and comfort given to Dee.

The family of Dolores J. Basile created this Life Tributes page to make it easy to share your memories.

Send flowers to the Basile family.