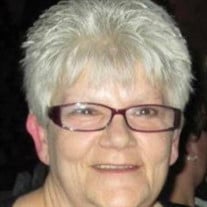 Dixie Lee Hogue, 65, of Rochester Twp., passed away January 6, 2021 at Good Samaritan Hospice, Beaver. Born December 23, 1955, in Beaver Falls, she is survived by her parents, David M. & Margaret Hull Dugan, North Sewickley Twp. She was an employee of Heritage Valley, Beaver, and was a former waitress with the former Pappan’s Country Kitchen, and the Beaver Valley Country Club. She was Catholic by faith, and attended the St. Cecilia Roman Catholic Church, and was a life member of the Rochester Turners Club. In addition to her parents, she is survived by her husband of 34 years, Gerald D. Hogue, Jr. and two sons and a daughter in law, Jordan C. and Halee L. Hogue, North Sewickley Twp., and Josh D. Hogue, Rochester Twp.; two granddaughters, Morgan and Madison Hogue, North Sewickley Twp.; one sister, Antoinette L. Hahn, and her companion, Norman Koleman, Beaver Falls; a niece, Misty Lee Hahn, a great nephew, Jerry Hahn, all of Beaver Falls, as well as numerous nieces and nephews. Dixie’s wishes were to be cremated with no prior visitation or service. Arrangements are being handled by the WILLIAM MURPHY FUNERAL HOME, INC. 349 Adams Street, Rochester. Memorial contributions can be made to the Club Hope Foundation, 237 6th St., Ellwood City, PA 16117.

The family of Dixie L. Hogue created this Life Tributes page to make it easy to share your memories.

Send flowers to the Hogue family.