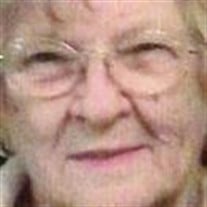 Clara L. DePaul, 90, formerly of Rochester, passed away Sunday, May 21, 2017, in Friendship Commons, Brighton Twp. Born March 24, 1927, in Rochester, a daughter of the late Gregory Frezza and Anna Matteo Frezza Castrodale, she was also preceded in death by her stepfather, Pacifico Castrodale. A housewife and homemaker, she was a member of St. Cecilia Roman Catholic Parish, Rochester, where she was a member and past secretary and treasurer of the Christian Mothers. She belonged to the Homemakers Club, enjoyed playing cards with her card club, and crocheting. She was preceded in death by her husband, Samuel Anthony DePaul, in 1987; a brother, John Frezza, and a sister, Janet Fishwick. Surviving are a daughter and son-in-law, Anna (DePaul) and Frank Dodson, Rochester; two sons and daughters-in-law, William H. Sr. and Christine DePaul, Hopewell Twp., and Dr. Samuel A. and Megan DePaul, Talking Rock, Ga.; six grandchildren, Michael Gianantonio and his wife Krista, Robinson Twp.; Kristin Gianantonio, Beaver; Samuel A. DePaul IV and his wife Megan, Kennett Square, Pa., and Alexa, Paige and William H. DePaul Jr., all of Hopewell Twp.; three great-grandchildren, Charles Gianantonio, and Stella Rae and Camilla Jo DePaul; a sister, Jean Pulliam, Newnan, Ga., and numerous nieces and nephews. Friends will be received Tuesday from 3 to 7 p.m. in the WILLIAM MURPHY FUNERAL HOME INC., 349 Adams St., Rochester. A Mass of Christian burial will be held Wednesday at 10 a.m. in St. Cecilia Roman Catholic Church, Rochester Twp. Father Mark Carter, O.F.M. Cap. will officiate. Interment will follow in St. Cecilia Cemetery. A Christian wake service will be held Tuesday in the funeral home. The family wishes memorial contributions be made, if desired, to the Beaver County Humane Society, 3394 Brodhead Road, Aliquippa, PA 15001. A special thanks from the family to the staff of Friendship Commons for the care and comfort given to our mother and the staff at Life Beaver.

The family of Clara L. DePaul created this Life Tributes page to make it easy to share your memories.

Send flowers to the DePaul family.