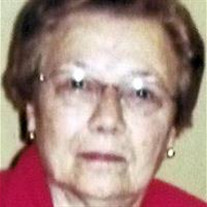 Christina (Stangas) Lambros, 85, of Rochester, passed away Thursday, February 22, 2018, in the Franciscan Manor, Patterson Twp. Born November 9, 1932, in Isari, Greece, a daughter of the late Paul and Dina Dordas Stangas, she was a seamstress by trade. She was a member of the Kimisis Tis Theotokou Greek Orthodox Church, Aliquippa; the Ladies Philoptochos Society, and the Aliquippa Seniors. Christina was an accomplished seamstress whose talents were deeply appreciated by many friends. Surviving are a son, John Lambros, Brighton Twp.; two sisters, Vasiliki Koniaris and Androniki Stangas, both of Athens, Greece; a goddaughter, Kristine Stedeford and her husband Eric, Franklin Park; a sister-in-law, Soteria Stangas, Minnesota; cousins, Nick and Stacy Koutoulakis, Valencia, Pa.; Louis and Nancy Koutoulakis, Hopewell Twp.; Peter Stangas, Minnesota; Mary Kearns, Illinois; Georgia and Lyndon Cornelius, New Jersey; Mary and Dean Cleaver, Pennsylvania; Kathy and Chris Lutz, Virginia, and Diane and George Davliakos, Valencia, and an uncle, Christos Stagas, Canada. She was preceded in death by two brothers, James A. Stangas, in 1979, and Peter A. Stangas, in 1996, and two cousins, Aristedes and Irene Koutoulakis. Friends will be received Sunday from 2 to 6 p.m. in the WILLIAM MURPHY FUNERAL HOME INC., 349 Adams St., Rochester, and on Monday from 9 to 9:45 a.m. in the Kimisis Tis Theotokou Greek Orthodox Church, Aliquippa, where a service will be held at 10 a.m. Father Stelyios Muksuris will officiate. Interment will follow in Woodlawn Cemetery, Aliquippa. Trisagion service will be held Sunday at 2 p.m. in the funeral home. The family wishes memorial contributions be made, if desired, to the Greek Orthodox Church, 2111 Davidson St., Aliquippa, PA 15001. The family wishes to thank the staff at Franciscan Manor and Kindred Hospice and her loyal friends for the care and comfort given to Christina.

Christina (Stangas) Lambros, 85, of Rochester, passed away Thursday, February 22, 2018, in the Franciscan Manor, Patterson Twp. Born November 9, 1932, in Isari, Greece, a daughter of the late Paul and Dina Dordas Stangas, she was a seamstress... View Obituary & Service Information

The family of Christina (Stangas) Lambros created this Life Tributes page to make it easy to share your memories.

Send flowers to the Lambros family.