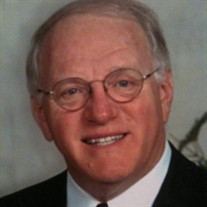 Charles N. “Chick” O’Data of Beaver, PA, formerly of Rochester, entered the Church Triumphant on October 4, 2021. He passed peacefully of cardiac amyloidosis, surrounded by his family. He was born in Pittsburgh on April 10, 1936 to Nicholas C. O’Data and Madelene (Rowlands) O’Data who preceded him in death. He is survived by his wife of 61 years, G. Marilyn (Bloom) O’Data, the love of his life whom he found sitting next to him in Spanish class at Geneva College. He is also survived by his children Jon (Judy) O’Data, Rochester; Ann (Tom) Lawson, Tallmadge, Ohio; grandchildren Aaron O’Data (Carrie Hadley), Pittsburgh; Lauren (Bret) Roth, Beaver Falls, and one great-granddaughter Riley Ann Roth; brother Gary (Debbie) O’Data, South Fayette, niece Jackie and nephew Drew. Chick was a long-time member of Grace Lutheran Church, Rochester, for which he served as a council member and helped establish the church’s endowment fund. He started a daily devotional email and prayer chain which he maintained for nearly 20 years. He took great delight in entertaining children at the church by pretending to take off his finger and surprising them by “finding” quarters in their ears. He graduated in 1954 from Brentwood High School and in 1958 from Geneva College. He joined the administration of Geneva College and became the Vice President for Development, a position he held for 37 years. Chick also served as Director of Administration and Chief Financial Officer for the Pittsburgh Symphony and Heinz Hall, and was a Director of National Sales for S.C. Johnson Company. Active in community activities, he was the founder and chairman of the board of the Beaver County Foundation which has contributed more than $9.6 million to the community in grants, awards, and scholarships since its founding. He was a long-time member of Rotary and a Paul Harris Fellow, an original board member of the Beaver County Corporation for Economic Development, a board member of the Fonar Corporation, and a 26-year member and former chairman of the board of the Medical Center—now part of Heritage Valley Health System. He was named Fundraiser of the Year by the Western Pennsylvania chapter of the Association of Fundraising Professionals and in 1992 was made a Kentucky Colonel by then-governor Brereton Jones for his contributions to philanthropy. An athlete and long-time supporter of athletic programs, Chick was inducted in the inaugural classes of both the Brentwood High School Hall of Fame and the Geneva College Athletic Hall of Fame. While at Geneva, he met and developed a friendship with Olympian Jesse Owens. They maintained their friendship until Owens’ passing. Indeed, throughout his life of service, Chick met and befriended countless people and his family often joked that they couldn’t go anywhere without running into someone he knew. Family and friends knew Chick as a strong, faithful, patient, generous, curious, and humorous man who cared as much about your ability to find joy in life as he did about your personal and professional growth. He was a consummate optimist with a strong constitution, enjoyed playing his banjo, and thought everyone should laugh at least once every day. Friends will be received Friday, October 8, 2021 from 2-4 pm & 6-8 pm at the WILLIAM MURPHY FUNERAL HOME, INC., 349 Adams Street, Rochester, with services held at Grace Lutheran Church on Saturday at 11 AM. His Pastor, Rev. Gregory S. Clagg will officiate. Burial will be in the Beaver Cemetery. Memorial contributions may be directed to Grace Lutheran Church, 393 Adams Street, Rochester, PA 15074; Geneva College (Charles O’Data Leadership Prize), 3200 College Ave., Beaver Falls, PA, 15010; or the Beaver County Foundation (Bloom-O’Data Fund), P.O. Box 569, Beaver, PA 15009.

Charles N. &#8220;Chick&#8221; O&#8217;Data of Beaver, PA, formerly of Rochester, entered the Church Triumphant on October 4, 2021. He passed peacefully of cardiac amyloidosis, surrounded by his family. He was born in Pittsburgh on April 10,... View Obituary & Service Information

The family of Charles N. O'Data created this Life Tributes page to make it easy to share your memories.

Send flowers to the O'Data family.