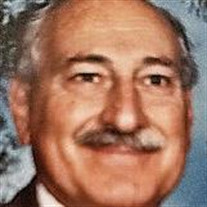 Casper J. “Cappy” DePaolis, 88, a lifelong resident of Freedom. It is with heavy hearts that our family announces his passing on November 11, 2017. He was our dear husband, father, grandfather great-grandfather and great-great-grandfather. He was born August 3, 1929, in Freedom, a son of the late Carlo and Elide Parzanti DePaolis. He was 1948 graduate of Freedom High School. Upon his graduation, he attended the University of Pittsburgh where he graduated in 1952 with a Batchelor of Science degree in Elementary Education. He was then inducted into the armed services during the Korean conflict and was sent to Puerto Rico to teach the Puerto Rican soldiers English. His wife Barbara joined him several months later where they lived for two years. In 1954, they arrived back home and he was hired by the South Heights Area School District where he taught 5th and 6th grades for 3 years. He was then hired by the Freedom Area schools where he taught at the Unionville Elementary School and in 1968 was made principal of the new Big Knob Elementary School. He remained principal until his retirement in 1993 after 25 years of service. In that time period, he earned his master’s and principal’s certificate at Westminster College. After his retirement, Casper and his wife spent part of every winter in Hollywood, Florida. He loved gardening, flower tending, reading and fishing. Casper took care of the flowers at the Freedom Memorial and was a member of the Freedom Memorial Committee for many years. At the age of 88, he was still tending to and planting his memorial flowers. He was a faithful member of St. Felix Roman Catholic Parish where he served as an usher and treasurer for many years. He is survived by his loving wife of 65 years, Barbara Ann ‘Bobbie’ Coulter DePaolis; together they raised their three cherished daughters, Michele A. Davis and her husband Ben, Freedom; Beth A. Curcio and her husband Randy Sr., Conway; and Alesia A. “Tish” Teny, and her boyfriend James Harbach, Patterson Heights; four granddaughters, Richelle Schuller and her boyfriend Steve Davis, Kristen Phillips and her husband Mike, Breann Conklin and her husband Justin, and Kimberly Curcio and fiancé, Thomas Phillips; grandson, Randy Curcio Jr.; six great-grandchildren, Keara Taylor and her husband Justin, Evan Seibert, Ryland and Silas Phillips, and Coulter and Kayden Curcio; one great-great-granddaughter, Lavaya Taylor; two brothers and sisters-in-law, Carl DePaolis, Lawrence and Marjorie DePaolis, and Fran DePaolis; and numerous nieces and nephews. He was preceded in death by one great-great-grandson, Zyon; one brother, Joseph DePaolis; three sisters and brothers-in-law, Flora and Jim Steel, Pauline and Paul Rusnak, and Lena and Febo Catana; and a sister-in-law, Clarita DePaolis. Friends will be received Tuesday from 2 to 4 p.m. and 7 to 9 p.m. in WILLIAM MURPHY FUNERAL HOME, INC., 349 Adams St., Rochester. A Mass of Christian burial will be held Wednesday at 10 a.m. in St. Felix Roman Catholic Church, Freedom. Interment will follow in Calvary Cemetery. A Christian wake service will be held Tuesday at 3:30 p.m. in the funeral home. The family wishes memorial contributions be made to St. Felix Roman Catholic Church, 450 13th St., Freedom, PA 15042 or the Freedom Memorial Committee, in care of Freedom Borough Office.

Casper J. &#8220;Cappy&#8221; DePaolis, 88, a lifelong resident of Freedom. It is with heavy hearts that our family announces his passing on November 11, 2017. He was our dear husband, father, grandfather great-grandfather and great-great-grandfather. He... View Obituary & Service Information

The family of Casper J. DePaolis created this Life Tributes page to make it easy to share your memories.

Send flowers to the DePaolis family.