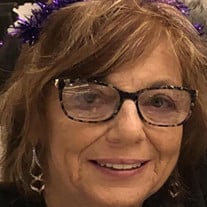 Beverly J. Smith, 67, of Freedom, passed away July 29, 2020, in UPMC Presbyterian Hospital, Pittsburgh. She was born May 12, 1953, in Sewickley, daughter of the late Clyde and Mary Faust Myers. She was a retired employee of several local governments. She was Methodist by faith, and was one of a group of friends since high school called the Christmas Gang, who enjoyed various activities together. Her family was the most important part of her life. She is survived by her husband of 48 years, William E. Smith Sr. She is also survived by two sons and a daughter-in-law, William E. Smith Jr, and Nicol, Brighton Twp., and Ryan M. and Cristine Smith, Monroeville; two grandchildren, Aiden, and Zoe Smith of Monroeville; two sisters and brothers-in-law, Sherry and Paul Luke, Altoona and Paula and Gary Boyd, New Sewickley Twp.; two brothers-in-law and sisters-in-law, Lee Smith and Karen, Industry and Susan Morgan and Doug, Rochester N.Y., her canine companion, Taddy Porter and numerous nieces and nephews. She was preceded in death by one brother, James Myers; a maternal grandmother, Stella Faust, and mother-in-law and father-in-law, Lee and Marjorie Smith. Beverly’s wishes were to be cremated. Due to COVID 19 Pandemic she wanted a celebration of her life to be held at a later date when family and friends can be safely together. Inurnment will be in Oak Grove Cemetery, Freedom Arrangements by WILLIAM MURPHY FUNERAL HOME INC., 349 Adams St., Rochester. If anyone wishes to rescue a dog from a shelter, please do it in her memory. The family wishes contributions be made to REAL MEN WEAR PINK. www.realmenwearpinkacs.org/pittsburghpa in her memory as having been a 35 year survivor of ovarian cancer and both sons have served as honorary members in 2017 and 2018 of REAL MEN WEAR PINK.

Beverly J. Smith, 67, of Freedom, passed away July 29, 2020, in UPMC Presbyterian Hospital, Pittsburgh. She was born May 12, 1953, in Sewickley, daughter of the late Clyde and Mary Faust Myers. She was a retired employee of several local governments.... View Obituary & Service Information

The family of Beverly J. Smith created this Life Tributes page to make it easy to share your memories.