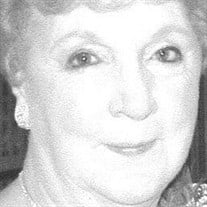 Barbara Irene Meyers, 77, of Beaver, our angel went home to be with the Lord on November 12, 2015, and is at peace. Born September 2, 1938, in Portland, Maine, a daughter of the late John H. and Geraldine L. Cain Lilley, she was a devoted wife... View Obituary & Service Information

The family of Barbara Irene Meyers created this Life Tributes page to make it easy to share your memories.

Barbara Irene Meyers, 77, of Beaver, our angel went home to be...

Send flowers to the Meyers family.