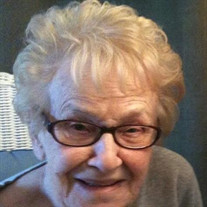 Anna Lapic Formerly of Daugherty Township Anna Lapic, 96, formerly of Daugherty Township, Pa., passed away peacefully with her family by her side on May 12, 2020, in El Sobrante, Calif. She was born February 25, 1924, in West Aliquippa, Pa., the daughter of the late George J. and Elizabeth (Papcun) Hutman. Ann was raised on a farm in New Sewickley Township and graduated from Rochester High School. She went to work at Bell Telephone as a long distance operator. Ann then worked at the American Bridge Corp. of Ambridge in a wire plant, supporting the war effort in World War II. Later in life, she was a sales associate at Kaufmann's Department Store in Rochester. Ann met the love of her life, George, during World War II. After he returned from serving in the army in Europe, they were married. They settled in Daugherty Township and raised four children. Ann and George both came from large close knit families and the years were full of large family gatherings, fondly remembered by everyone to this day. Ann was a member of St. Cecilia Catholic Church in Rochester. In addition to her parents, she was preceded in death by her husband, George; one daughter, Kristine Lapic; two sisters, Margaret Hutman and Frances Neish and four brothers, Anthony, Thomas, George and John. Surviving are two daughters and sons-in-law, Donna Chichkanoff (Boris) of El Sobrante Calif. and Barbara Berrian (George) of Warwick N.Y.; a son, George Lapic (Doreen) of Stone Mountain Ga.; a beloved granddaughter, Marielle Berrian; a sister-in-law, Josephine Lapic and many loving nieces and nephews. Ann's priority was her family. She was an excellent cook and baker and prepared home cooked dinners with homemade desserts nightly. She was famous for her homemade donuts and Slavic nut rolls. She was a skilled seamstress and made dresses for family members' proms and weddings. Gardening was another passion and Ann spent many spring days visiting greenhouses with her sister, Frances and daughters. She passed down her love of sewing, gardening and cooking to her three daughters. Ann and George loved to travel. Every year a family trip was made, exploring the Unites States, until the last child left the house. Once they were empty nesters, they continued traveling and visited their children in New York, California and Georgia and explored new locations like Hawaii and Europe. After George passed away in 1990, Ann continued her annual trips to New York and California and made trips with her sister and best friend, Frances. In 1995, Ann made a memorable trip with her daughters to former Czechoslovakia, the birth country of her parents. Ann was a quiet but strong person who had a smile for everyone. She will be missed terribly by her family. There will be no visitation or Mass at this time due to the COVID 19 Pandemic. Private interment will take place in the SS Peter & Paul Ukrainian Cemetery, Ambridge and a Service for Ann will be held at a later date. Funeral arrangements provided by WILLIAM MURPHY FUNERAL HOME INC., 349 Adams St., Rochester.

The family of Anna Lapic created this Life Tributes page to make it easy to share your memories.

Send flowers to the Lapic family.