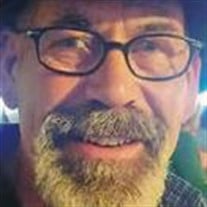 Aaron L. Stevens Sr., 59, of East Palestine, Ohio, and Brighton Twp., passed away Sunday, November 13, 2016, in Allegheny General Hospital, Pittsburgh. Born March 4, 1957, in Everett, Wash., a son of Paul C. and Anna Mae Brown Stevens of Everett, Wash., he was a self-employed owner of Stevens Flooring and was Protestant by faith. Aaron loved his pet animals, the outdoors, hunting, gardening, landscaping and motorcycles. Surviving, in addition to his parents, are his fiancée and significant other, Kimberly J. Edmiston, with whom he had been together for 16 years, of Brighton Twp.; a daughter, Mariah Rose Stevens, Streetsboro, Ohio; a son, Aaron L. Stevens Jr., Youngstown, Ohio; three stepdaughters and two stepsons whom he considered his own children with Kimberly, Lori Thompson and her husband Kurt, Kelly Quiles and her husband Carlos, Heather Pico and her husband Dustin, Daniel Edmiston and his fiancée Jill, and Michael Edmiston and his wife Devin; 14 grandchildren who loved their pap; two sisters and a brother-in-law, Janet E. Stevens, and Polly Ann and Charles Widdis, all of Everett, Wash., and his pet animals who he loved dearly. Friends are invited to visit with the family on Tuesday from 1 p.m. until the time of service at 3 p.m. in the WILLIAM MURPHY FUNERAL HOME INC., 349 Adams St., Rochester. Pastor Bill Blume, of Faith 2 Faith Ministries, Rochester, will officiate. Inurnment will be in Union Cemetery, Monaca. The family wishes contributions be made, in his memory, to the Beaver County Humane Society, 3394 Brodhead Road, Aliquippa, PA 15001.

The family of Aaron L. Stevens created this Life Tributes page to make it easy to share your memories.

Send flowers to the Stevens family.